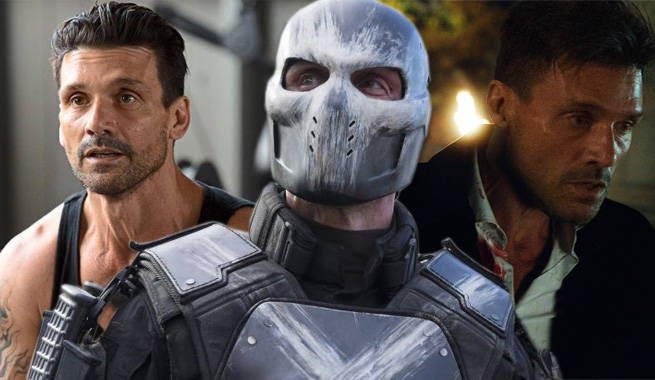 2016 is about to blow up for Frank Grillo. The New Yorker recently packed up the family and moved to California where he does most of his work these days. That work has been almost non-stop lately, a sign of success for actors, and Grillo has three big projects dropping within as many months.

Earlier today, ComicBook.com had the chance to speak with Grillo during a Live Q&A on Facebook. Check it out below!

First on the horizon is Marvel's Captain America: Civil War in which Grillo returns to the Marvel Cinematic Universe after debuting as Brock Rumlow in The Winter Soldier. Despite his new Crossbones character being hell bent on revenge against Steve Rogers, Grillo and Captain America actor Chris Evans are actually very close friends. "Me and Evans are great friends," Grillo says. "It's a great relationship that's been forged over the years."

As for the days on set when he, Evans, and Anthony Mackie have to do battle, it gets a little bit more intense but they maintain great attitudes and high levels of fun. "It's a physical group of guys and we also have the best stunt guys in the business, as well," Grillo goes on. "It's fun, we joke around a lot, you put on a costume, and it's like being an eight year old boy."

A lot of actors burdened with donning a super hero costume run into some issues on set. Spider-Man actor Tom Holland admitted his new suit was baggy at first and Christian Bale jokes that using the bathroom as Batman is a challenge but Grillo says Evans has it the hardest on the Marvel set, saying "I think the guy must lose nine pounds every time he wears that thing." For Crossbones, the sweating and using the bathroom aren't as much of an issue as just general movements are. "I think the most difficult thing is being able to move and not be so stiff," Grillo explains.

Following Civil War on Grillo's slate is the start of Kingdom's third season. If you're not familiar with the series, it's a gritty, raw take on MMA fighting. Grillo plays a hardnosed trainer by the name of Alvie who left off last season expecting a baby and set to train the fighter who his son will be taking on in season three's headline match-up.

"Right off the bat, you're gonna see something pretty serious go down with the baby, with Lisa, and with the relationship in general," Grillo says of Kingdom's third season. "It's pretty intense and it's not gonna change in the course of the relationship. There's a reveal at some point with Nick Jonas' character and Tucker is crazy as ever."

As for the big showdown between Jay and Ryan - Alvie's trainee and son, respectively - Grillo and his character are torn. "You want to root for your son but you've gotta also be a coach," the actor admits.

Kingdom's third season airs June 1 and one month later you'll find the busy actor again for the third installment of The Purge with Election Year which, sadly, looks like a not so unimaginable future for United States. "In the beginning when we shot the movie it wasn't called Purge: Election Year," Grillo reveals. "Oddly enough, the guy who plays the President in the movie, he plays him like Trump - totally by accident. There's a lot of parallels between the GOP race and the movie and the messages that are being put forward and then Universal got this great idea to call it Purge: Election Year."

In the event of a real purge, Grillo is hightailing it out of the states... "I have an Italian passport," he says. "I would pack it up and fly over to Italy."