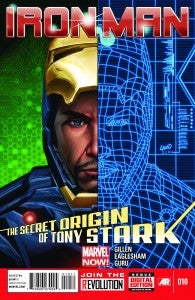 The "Secret Origin" of Iron Man, which may date back to when Tony Stark was a baby, will be revealed in the next arc of Iron Man, coming beginning in May from writer Kieron Gillen and artist Dale Eaglesham. "This is all completely stuff that people do not know," Gillen said during one of Marvel's Next Big Thing conference calls, stressing that this won't play into his existing origin story in an explicit way. "This is very much things you did not know but would be intrigued to learn." In fact, the writer compares it more to Superior Spider-Man in terms of seismic changes to what fans think they know about the character. "This is big. By issue #10, Tony's conception of everything will have changed. That was me kind of foreshadowing this story. I see what Dan Slott's been up to these past few months, and I said, 'I want a piece of that.' This will be interesting in terms of response. It's not going to be minor," promised Gillen. The structure of the story, which revolves around a secret kept by Howard Stark (Iron Man's father), not the hero himself, will bounce back and forth between the past and present. "I wanted to do a big, meaningful story to hearken back to the beginning of Iron Man and all of that," Gillen told reporters. He called the story a "period piece," acknowledging that those are hard to pull off with the rolling timeline of the Marvel Universe but saying that the "eternal myth" of Las Vegas, where part of the story is set, helps to keep it timeless. 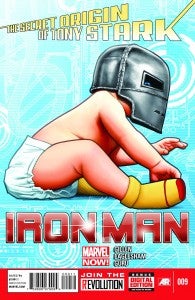 And Dale Eaglesham's art plays into that, too; "This will feel like 30 years ago, no matter when you read it," Gillen teases. Eaglesham will be taking over art chores on the title this arc after the introductory arc featured the work of Greg Land, who will continue to provide covers for the series. Of the story itself, Gillen was a bit cryptic, but bits of it will definitely revolve directly around Iron Man's parents. "Why is Tony different?" He asked rhetorically. "Why is Tony not Reed Richards? In the largest metaphorical sense, it's how Tony came to be." "Drama is about what the character wants, and what they're willing to do to get it. We put Maria and Howard into a really painful situation, and see what they do about it," said Gillen. Whatever Howard and Maria do, Gillen says that there's a lot of flexibility in dealing with those characters, especially Maria, who has had less focus over the years. "With Howard, you've got less room," the writer said. "But you've still got a lot of room. There's this wonderful really short story that Matt did which was pretty much a 'How I Met Your Mother' story. I feel I have a lot of room, which is good." "I think Howard would be incredibly proud" of his son, Gillen added. "Tony's hard on himself, and I've kind of been hard on him. But on any reasonable level, Tony should be proud."