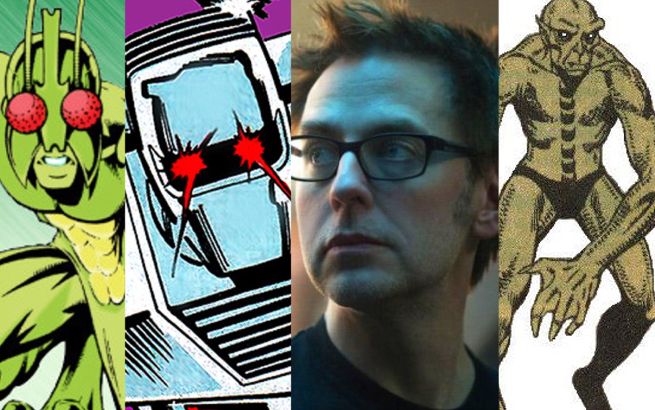 Adam Green and Joe Lynch's The Movie Crypt remains one of the two essential podcasts about filmmaking, alongside Jeff Goldsmith's Q&A. This week, Green and Lynch finally got to sit down with their friend James Gunn, ready for him to share filmmaking advice and a wheelbarrow of anecdotes.

Conversation regularly turned to Marvel and Guardians of the Galaxy, including one interlude where Gunn answered a listener's question and listed characters that he had considered using in the film, or indeed its sequel, but isn't legally allowed to.

"There's characters that I've been interested in that I'm not allowed to use but I won't go so far as to say I definitely would have had them. There was a really good chance Bug was going to show up in the first movie but we do not own him... but, anyway, that was going to happen, perhaps. Listen, I really love Rom: Spaceknight, as everyone at Marvel knows because they've given me Rom stuff... but we don't own Rom. I would love for Rom: Spaceknight to show up because I love his story, I love the way he looks, I love everything about him...

There are other characters, but basically, some characters we can work around and we can use. Listen, I wanted to use the Badoon, but the Badoon we don't own... they're really interesting. They would be like the cannon fodder guys who were like the Sakaaran in my movie... I wrote them as Badoon but I just did a search-replace-Sakaaran when I found out we didn't have Badoon. It was strangely late in the process when I found that out. They were designed as Badoon."

Incidentally, Gunn was also asked which Star Wars spin-off he'd like to direct and he reiterated something he told us when we interviewed him a while back and said he wouldn't want to direct any. He's a Star Wars fan, and he's certainly very excited to see The Force Awakens but Gunn says he wouldn't want to make one because it wouldn't be "his thing." As to what Star Wars spin-off he'd like to see, he said Boba Fett.

The whole podcast lasts almost two hours and I can't recommend it enough.