The Avengers always come together in times of great need, but everyone did not return from their latest mission alive.

Spoilers incoming for Avengers #674, so if you haven't read the issue yet you've been warned.

The Avengers find themselves trying to stop Counter-Earth from crashing into Earth, destroying both in the process. That plan was put into motion by the High Evolutionary, and they only have a small amount of time to keep them from colliding. As they journey deeper into Counter-Earth to find a solution, Vision reveals a startling revelation to his daughter Viv, who recently became fully human.

He reveals that he previously encountered a version of himself from the future, who told him that she will die long before he does. She will age normally, and one day Vision will have to bury her. They have an emotional moment as he reveals that as the reason he wants to spend o much time with her and keep her safe.

That's the reason he leaves her behind when the Avengers have to face more of the High Evolutionary's minions, but she ends up finding someone else affected by his past deeds. She discovers one of his creations restrained in front of a device, which turns out to be the Orbit Engine, the one thing that can divert the planet's course. 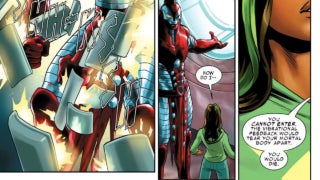 The being put himself there after he questioned the High Evolutionary's decision about destroying the Ani-Men. Viv explains that not all Father's are like him and that he could save millions of humans and Ani-Men by stopping the planets from colliding. Viv wins him over, but when the other Avengers approach he takes it as an attack and accuses Viv of lying.

As the other Avengers battle it out Viv takes it upon herself to assume the controls, but the being previously explained that he would have to use the controls, as the device would obliterate Viv's mortal body. Viv does it anyway though and diverts Counter-Earth's course to miss Earth.

Unfortunately, she is starting to vanish from existence, completely fading as Vision reaches out for her. The next scene reveals Vision and the rest of the team standing at her grave, mourning their fallen ally.

Geez, just got sad talking about it, and you can check out the spoiler images in the gallery.