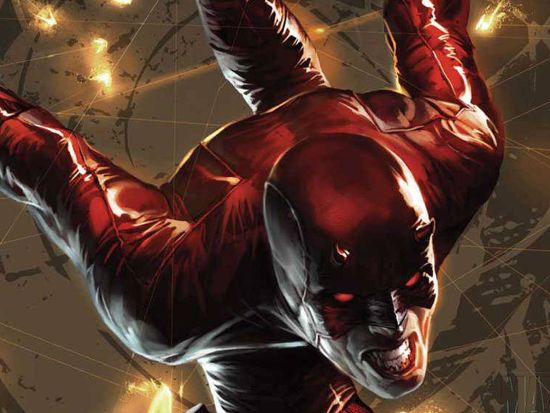 In a recent chat with Kevin Smith on the Fat Man On Batman podcast, Marvel Entertainment's Chief Creative Officer Joe Quesada revealed some scoop on the upcoming Marvel Netflix shows, which will initially include four separate shows for Daredevil, Power Man, Iron Fist, and Jessica Jones. Quesada praised the New York setting for the shows, confirmed that the shows are definitely a part of the Marvel Cinematic Universe, and indicated that viewers would be able to binge watch the shows all at once. "We're shooting in New York. That's the fantastic thing about it is that we're shooting at home. We're shooting where these characters belong," said Quesada. "These stories take place in Hell's Kitchen." Quesada indicated that the shows would be filming in areas of Brooklyn and Long Island City that still look like the old Hell's Kitchen. He also added that some things they would probably build inside of a studio. "It thrills me to no end to have these things happening in New York. That alone is going to give it an incredible vibe," said Quesada. "It's just once again…it's like Marvel taking ownership of New York, saying this is where we're from, this is our universe, this is where it started." In describing the setting for Daredevil, Quesada said, "It smells of dark alley, vomit, and piss." While there has been some question as to whether the Marvel Netflix shows would be released in serialized format like traditional network shows or all at once as Netflix has done in the past, Quesada seemed to suggest that it would be the latter. Quesada said, "You're going to get all these episodes, and you can binge watch them however you want, and then binge watch them again." Quesada also confirmed interconnectivity not only between the different Netflix series themselves, but also with the other Marvel movies and TV shows. "There will be some interconnectivity, much like the movies," revealed Quesada. "They will exist within the cinematic universe again, so this is all the same world as S.H.I.E.L.D. and the Avengers." Despite existing in the same universe, Quesada also stressed that the Marvel Netflix series would be different from anything Marvel (or anyone else for that matter) has done before. "Although these are superhero stories, this is different now. This is the street level…this is the street level noir side of the Marvel Universe. Something that you haven't really, really seen in any of our Marvel movies," said Quesada. "And probably more ground level, than I think you've seen. This is not like us doing Batman, Dark Knight or any of that stuff. This is very Marvel doing street level superheroes." Quesada added, "The scripts are coming in. They are pretty fantastic. They're really emotional. They're very, very original. But at the same time, it is Daredevil. It is Matt Murdock. We will eventually, hopefully start casting really, really soon, but I'm very, very excited about it." When Smith asked whether Kingpin would be part of the Daredevil or Spider-Man universe, Quesada remained coy about the villain. "I'm not going to say who the villain is in our story," answered Quesada.

She-Hulk's Daredevil is a "Very Much Planned" New Version (Exclusive)

Rick and Morty Co-Creator Is Taking Pages From Marvel's Multiverse