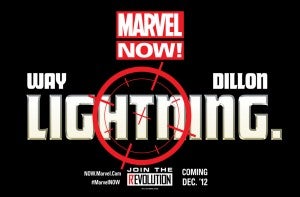 Daniel Way and Steve Dillon will take on a new title for Marvel NOW! launching in December, according to a new promotional image released by Marvel Comics. "The future of Marvel NOW! is Lightning," said the e-mail sent to the comics press earlier today. It's not immediately clear what book the pair might be taking on, although there's been some speculation online that it might be a new take on Marvel's Thunderbolts, whose tagline has long been "Justice like lightning." In any case, expect to see a clarification soon, along with probably more of these teasers over the next few days, not unlike what we saw for the November titles last month.

Marvel NOW! Struck By "Lightning" From Way and Dillon