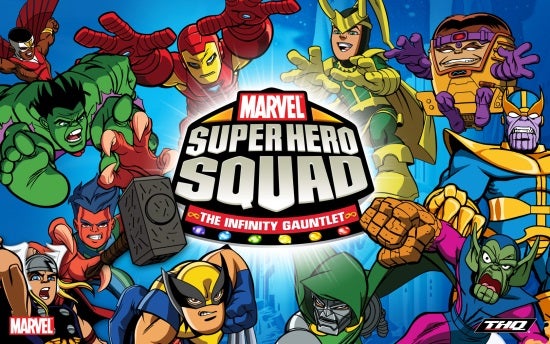 is no longer available for purchase in either Sony's PlayStation Network store or Microsoft's Xbox Live Arcade marketplace. PSN lists the game as "disc only" while the XBLA page simply doesn't have a price or a purchase button. Marvel Super Hero Squad: The Infinity Gauntlet is a sequel to the original Marvel Super Hero Squad video game, based on Marvel's line of toys of the same name that features cartoonish, super-deformed versions of their iconic characters. The game's disappearance follows the removal of Marvel vs. Capcom 2 and Ultimate Marvel vs. Capcom 3 from those marketplaces in December, as well as the removal of several of Activision's Marvel games – four Spider-Man games (Shattered Dimensions, Edge of Time, Friend or Foe and Web of Shadows), two X-Men game (X-Men: Destiny and X-Men Origins: Wolverine) and the more recent Deadpool – from PSN, XBLA and Steam. Activision's movie tie-in The Amazing Spider-Man remains available and the company is still set to publish the sequel, The Amazing Spider-Man 2. There's been no official reason given for the removal of these games. Perhaps, with Disney's acquisition of the talent at LucasArts, the media giant is allowing previous licensing agreements to expire so that they can move development and publication of future games in-house. Even if that is true, players of the MMO Marvel Heroes shouldn't worry too much about investing time and/or money into that game. Gazillion's creative direction, Jeff Donais, told PCGamesN back in December that the company's licensing deal is good for a full decade, so that game won't be going anywhere for a while.