Spider-Man already has two Venoms to deal with, but his life just got way more complicated.

Spoilers incoming for Amazing Spider-Man #792, so if you haven't read the issue yet you've been warned.

Amazing Spider-Man #792 is the second part of Marvel's Venom Inc. storyline, part 1 of which gave fans a new Anti Venom. The new Anti Venom is actually Flash Thompson, who used to be Venom, and he isn't the only new person to get a symbiote by issue's end. 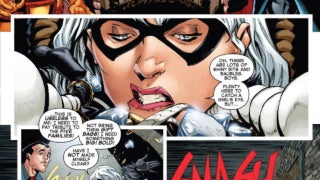 The issue shows crime boss Black Cat collecting payments from her loyal followers to present to the five families, but the gathering is crashed by a group led by the Looter, at least so it seems. The group is actually led by Lee Price, who previously held the Venom symbiote before it was taken from him by Eddie Brock.

Now Price has found a way to infect others with a new symbiote, and his followers are all walking examples. They take on Black Cat's crew and start infecting them one by one, including Hammerhead, Mac Gargan (Scorpion), The Brothers Grim, and Melter. Black Cat gives her crew tips on how to take them down (fire and sonics), but once Price turns Hammerhead against them with a symbiote it all starts to go downhill.

Once it starts to break down Black Cat challenges Price to a one on one battle. The scene transitions to Spider-Man and Anti Venom, who end up tracking a symbiote signal to Black Cat's hideout.

They make their way inside, but they soon learn they aren't alone inside. A voice calls out "Hi Boys", and then the scene shows the lit up room, which features all of Black Cat's crew sporting symbiotes, making these already deadly villains even more lethal.

It would seem Anti Venom and Spider-Man will have their hands full next issue, but in the meantime, you can check out the spoiler images in the gallery.

The good news is that Anti Venom's touch hurts the original symbiote, but it remains to be seen if it will work against this new and improved version.