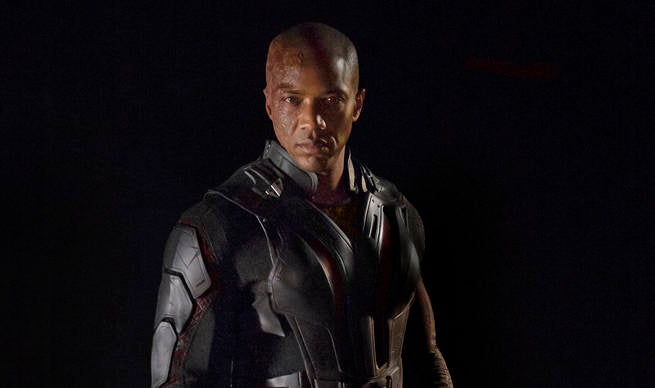 It's been a while since we last saw J. August Richards running around Marvel's Agents of S.H.I.E.L.D. and given the events of "Afterlife," his return couldn't have come at a better time. If you haven't seen the episode yet, spoilers lie ahead. You've been warned.

A few weeks back, ComicBook.com was taken to a top secret location where we had the chance to grill some of the cast members about this season. J. August Richards was among the cast members we spoke to, and when he showed up wearing a new costume, we were all taken by surprise. Below are some of the highlights of our chat with the actor where he shined some light on what he's been up to, and if his new suit makes espresso.

On the missions he's been running for Coulson.

Yeah, Coulson has had Deathlok in his back pocket since we saw him last. So he pulls me out of hiding to help him out with this really huge mission that is vital to S.H.I.E.L.D. As you can see, I got a lot of upgrades while I've been gone. My costume is very different. There are things that are still the same. The character has been evolving since we've seen him last. This is like Deathlok 2.0.

On if Deathlok has found his purpose in life.

When I'm playing him now, I like to think Mike is now owning Deathlok. Before I think he was really reluctant. Even back when I was playing the character, honestly I didn't know how to move, or act. I felt that was really Mike with this body that got forced on him. Like with this artificial leg that we jokingly say cost $10MM, or the rockets on his arm, he didn't know how to incorporate that into his life, or his movement.

On Mike's relationship with Skye.

Yeah, me and Chloe [Bennett] always say we started this whole thing. We shot our scene where she sees me jump out of the building together. I was the first shot of the pilot!

On if it will be tense when the two meet again.

That's one of those things I can't answer! But I will say yes, our powers are significantly different. For Mike, he's a regular guy who has to deal with the responsibility of having this much power is a little different than what she is going to go through.

On his new upgrades and abilities.

I have so many cool abilities. I have three USB ports, a Firewire connection, you can get wi-fi off of me, this thing on my arm makes cappuccinos, and I have all of these cool little powers here and there.

Lets see, I do have some new powers though. I think you'll see them unfold over time though. I mean at the core he still is who he is. He has a bunch of mechanical parts that do a bunch of interesting things. This arm piece shoots rockets and he's still super strong from the Centipede that he got in the first episode. Even in the comics I feel like he's a character with a thousand powers that constantly unfold. It's a character with a lot of possibilities. And again even with reading the comic, I feel like I can't put a finger on ALL of his powers and the things that come over time.

On if he has a favorite.

On his reaction to the new costume and if he knew about it before hand.

Man, it was like the first time. I was in fittings for the first costume even before I knew I was even going to be Deathlok. They keep me in the dark as much as you guys. But, I saw a drawing of it and I really liked it. I mean it really came out perfect. Just looking at the back (stands up and shows his back), I think that's so cool for some reason. I love all the little pieces that fit together nicely. It really puts me in the body of the character. Also, there are like a thousand people futzing with me all day long, making sure my lights are on, my gloves are on, and my makeup is right.

On when he found out he'd be back.

I think I found out a few weeks before returning to work. I had been kind of tipped off that i'd probably be returning, so I had to keep that a secret for a while too. I was really excited to come back. But every time I do come back, I feel like I'm playing a completely different character because there is so much that goes on off camera. Like I said before, Mike Petersen is owning his role as Deathlok and that's a whole different performance.

On his current relationship with Coulson.

Fans will find out that Coulson and Mike have actually been secretly working together since we last saw Mike. I always think about this character's humanity, so I feel like Coulson is someone that Mike doesn't want to disappoint and someone that he really looks up to. I also feel from the very beginning he's been looking for redemption and seeing Coulson as a key to that. Coulson can help him be the hero he's always wanted to be for his child. And even that theme I think is playable if you're a superhero, or a character in a drama. Like just trying to be that person for your child. That's the only thing I think about with this character, him as a father, with a son. There are a lot of levels to that, you know?

On if he'll get to interact with other members of the team now that he's back.

I know, as it was left in Season 1, there was a lot of unfinished business with the other team members. I think you'll get to see that played out a bit.

On if Mike will get to see his son.

I think we'll get into that.

You know, as it was left, I felt like Mike really couldn't face his son until he became a hero.

On if he thinks Mike will ever consider himself a hero.

Dude. DUDE. I think about that, all the time. Seriously. It's so funny because thats what makes him such an interesting character to me. Even if he saved the entire world, I don't know as if even then he could face his son. I think something really big would need to happen for him to get over everything he feels guilty about.

I mean Mike suffers from an immense sense of guilt. Even when I came back the first time, I felt like Mike shouldn't have felt as guilty because it was the Centipede making him crazy, but he takes so much personal responsibility from his sins that it would take a lot for him to feel better about himself.

God, you guys are asking the questions I ask myself that I keep dancing around trying to figure out. I think when I said in one of the episodes that "Mike Petersen is dead," I thought the only way that line could have meaning if it were not true. I always think of Mike Petersen being at the core of this character, and whatever happens as a result of that, is all Mike Petersen. I think he's 100% there.

On how Richards is able to balance his acting schedule.

Dude, my schedule has been an absolute miracle. Every time I'm needed somewhere, I'm somehow magically available. I was shooting a show in Toronto, one in Vancouver and some guest appearances here and there, and for some reason I was always able to work them out. Then miraculously there was a hole in my schedule for me to get in and get out of Grays Anatomy. Usually, the opposite happens where I get two jobs at once, but I've been in the zone recently, where i'm able to do everything and that excites me. I'm super happy about that.

On if he thinks Deathlok's look will get closer to it's comics counterpart.

You know, its such work in progress and I can see a scenario where that happens. I was really excited in one episode where Mike was under a x-ray and we got to see that underneath it all he does look a bit like the comic character. We'll see, it's constantly evolving as you can already see.

Marvel's Agents Of S.H.I.E.L.D: Deathlok Has A New Look