Marvel's Black Panther is coming into view, and a new poster gives fans a look at T'Challa's upgraded costume.

The claws are going to be most noticeable, which of course are made from the indigenous metal Vibranium, something that Wakanda uses in all of its weapons and technology. The actual armor seems the same, but his mask is a bit different than the one fans have seen in the trailers thus far.

The biggest difference, of course, is T'Challa's eyes, which are fully viewable in this version of the mask. Now, that could be a built-in function of the mask to lift the lenses up, as thus far we've only seen it with the white-like lenses in place. This could be incredibly useful, especially when you want someone to trust what you're saying since looking into someone's eyes is more convincing than an unmoving mask. 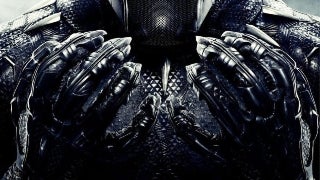 You can view the new poster in the gallery.

Unlike other superheroes, Black Panther doesn't have a secret identity. T'Challa and Black Panther star Chadwick Boseman recently explained why that isn't necessarily a problem for the King of Wakanda.

"No, no no no," Boseman told Jimmy Kimmel. "You know, there's still, there's a certain like fear factor that the mask creates, and there's still a legend around the character that has been created. I guess you would either have to go to some of the comic books or see it in the movie, but there's an aspect of it that's like "is this Black Panther thing real." You don't need the secret identity because there's still the mystery of the Panther's prowess."

While the character doesn't have need of a secret identity, that doesn't make the job of actually being King any easier, and to Boseman that can make the character more of an anti-hero.

"He has the attributes of a hero, but has difficult decisions, difficult choices. Sometimes there's no right answer," Boseman said. "Everybody has heard the line, 'It's hard for a good man to be king.' I think there's a sense of all the complications of being a good leader."

Fans will find out how he does when Black Panther hits theaters on February 16, 2018.