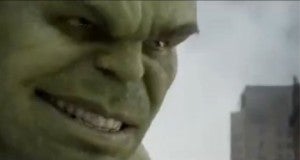 Last night, we discussed how Joss Whedon, the director of Marvel's The Avengers, revealed in the director's commentary on the film's Blu-ray that he believed Jim Starlin's Avengers stories to be "seminal" works. Another fascinating thing that he brought to the discussion was the inspiration for The Incredible Hulk's personality in the film.

The character, of course, has a storied and somewhat spotty history on film. The Bill Bixby TV series is still beloved by many and is arguably the first major live-action success for a Marvel character--but in recent years we've had two films, neither of which particularly worked.

So, how did Whedon approach writing the character?

"That idea of how he would make that work, again, became a central through-line that's paid off right before he becomes the Hulk for the second time and it speaks to a very human truth. We all have these reservoirs of anger, and how do we deal with them? Do we deny them, so that they flare up, or do we incorporate them into our being in an even fashion so that they are present but not prominent? It's that kind of mixture of bumblingness and grace that Mark brought to the character--it's informed by that desire not to bump into anything, not to get near conflict--but the confidence he has from having incorporated it is very palpable."

The director also said that Mark Ruffalo, the actor who played the role, didn't bring a ton of confidence the the role in the early going and joked for the first week, "It's not too late for you to re-cast."

Everyone involved is probably pretty glad he didn't.

The Avengers's Hulk Was Based on "The Bixby Model"