Ahead of the comic's debut next month, Marvel Comics have provided us with an exclusive first look at the pages of The Sentry #1, coming from Jeff Lemire and Kim Jacinto.

The new comic comes after the character's surprising return in the pages of Doctor Strange by Don Cates and Gabriel Hernandez Walta, bringing the forgotten hero of the Marvel Universe back to life after an interesting period as a dead man — or as the Horseman of Death.

"The Sentry is a fascinating character," Lemire previously told ComicBook.com. "I absolutely loved the original Sentry series by Paul Jenkins and Jae Lee when it first came out, so I jumped at the chance to write the character. The Sentry has a lot of emotional depth and a lot for me to dig into in terms of the psychology of the character. He is immensely powerful and has the potential to be one of the greatest and most important heroes in the Marvel Universe, but he is constantly undermined by his own dark side and his own self-doubt." 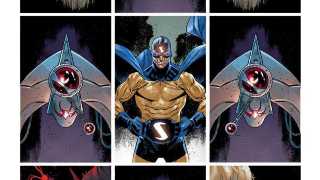 Check out the preview pages in the gallery!

It looks like the Sentry will immediately going up against the villainous aspect of his fractured mind, the powerful entity known as the Void, right away. Lemire teased the character's involvement, calling the Void a vital aspect of the series.

"You cannot have The Sentry without the Void," Lemire says. "But what I was very conscious of was not simply retelling the same stories that had been told in the past with Sentry and Void. I want to see their relationship and their characters evolve and go in new directions."

And as the pages show, it looks like the Sentry will have some allies as some new similar-looking characters arrive to help the hero fight some Void-esque monsters. Could this be the alternate reality Jacinto hinted at?

"We are going with the traditional Sentry look but we have some surprises in store too." The artist teased his artistic style changing between "a bit clean to dark and gritty," depending on the different reality the story will take place in. He added that it's a challenge, but "drawing different realities are fun and sometimes fun takes out the challenge."

The Sentry #1 will be available in comic stores and online in June!

Are you excited for the return of Marvel's forgotten hero? Let us know in the comment section!

Exclusive: The Sentry Family Arrives in 'The Sentry' #1 Preview