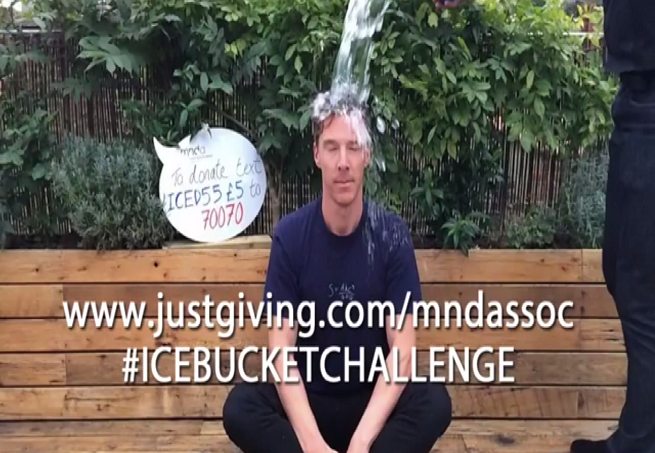 The Hobbit antagonist and Sherlock star Benedict Cumberbatch took the ALS Ice Bucket Challenge finally after having been nominated five different times, including once by Marvel's trickster god Tom Hiddleston.

He has a little fun with it...

...okay, so that may actually be the most wardrobe changes ever made necessary by the Ice Bucket Challenge.

Also, at some point I started having '80s kid flashbacks to You Can't Do That On Television, which is probably not entirely a bad thing...

Hiddleston is making it easy for fans to donate to U.K. ALS charities rather than the U.S. charity that had been spearheading the effort and getting most of the donations, in case fans wonder why his video title and the web addresses, etc., are all different from what you've seen before. He does work with the organization outside of the Ice Bucket Challenge.

Fans in the U.K. can donate to www.justgiving.com/mndassoc or by texting ICED55 (followed by an amount e.g £5) to 70070 on their mobile phones. The ALS Ice Bucket Challenge has led to a significant rise in donations to American ALS charities. Donations in the last couple of weeks are million of dollars greater than the same period last year.

Benedict Cumberbatch Does the ALS Ice Bucket Challenge -- But How Many Times Was He Nominated?