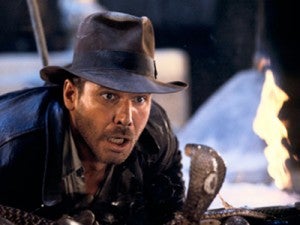 According to a number of online sources, Indiana Jones and the Raiders of the Lost Ark (really it's just Raiders of the Lost Ark, but it's been rebranded for home video and there's no reason to believe that won't continue in the future) will see a brief theatrical re-release in September, ahead of the release of the Indiana Jones Trilogy on Blu-ray later in the month. Director Steven Spielberg and executive producer George Lucas have reportedly given the go-ahead for Raiders Of The Lost Ark to be released in a one-week engagement in select IMAX theatres beginning September 7, 2012. That will put the film in theaters a little more than a week ahead of the Blu-ray release (it should leave theaters September 13, with the Blu-ray released on September 18). While it's fashionable to reissue films in 3D to take advantage of the large number of theaters currently supporting the technology--and Lucas himself has been doing so with the Star Wars franchise--an IMAX reissue is less common, and many critics feel is speaks to a desire for the best possible presentation of the material, rather than a total reinvention of the original cinematic experience. Last month, Christopher Nolan's three Batman movies were played back-to-back in a limited, one-day engagement at certain IMAX theaters, culminating with a midnight screening of The Dark Knight Rises.