Okay, so we realize that everyone uses IMDb nowadays and so these kinds of stories lack the punch they did back when everyone relied on Entertainment Weekly to remind you of who people were. Still, Shane Black has built a heck of a supporting cast in Iron Man 3 and since many of them get barely any screen time and few or no memorable sequences (possibly because an hour was cut from the film?), it seemed worth shining a little light on a few of these familiar faces. 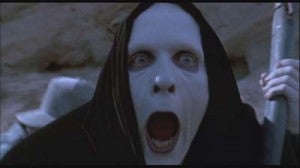 President Ellis - William Sadler Let's leave aside for a moment the fact that the President is named After Warren Ellis, which is a nice nod in the comic book's direction. Who's William Sadler and why does he look so familiar? Well, first of all, he's Death, dude! Probably best known around these parts as the guy who played the Grim Reaper in Bill and Ted's Bogus Journey, Sadler has also been a staple of Frank Darabont movies, starring in The Shawshank Redemption, The Green Mile and The Mist. If Darabont had stuck around and they'd gone in another direction with the whole Woodbury story, I could see him having been the Governor, or at least one of his trusted goons. You can see him right now in the Amazon TV pilot Onion News Empire, as well as in the upcoming sequel Machete Kills. 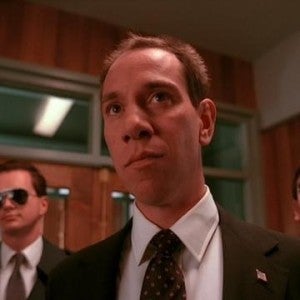 Vice-President Rodriguez - Miguel Ferrer Let's face it: Miguel Ferrer is one of those guys you were surprised to see standing in the Vice President's shoes early in the movie. I saw him and I just said, "Holy crap! How is he doing a role where he isn't evil?!" Or at least officious and callous. Ferrer has starred in an absolutely insane number of projects you might remember him from over the years, most notably Twin Peaks (he played Albert the FBI pathologist with the bad attitude), RoboCop (he was Bob Morton) and The Stand (he played Lloyd). He also had a role in Star Trek III: The Search For Spock. And, of course, there's his fairly substantial career as a voice actor. He's worked on Superman: The Animated Series, Men in Black: The Series and Young Justice, among many others.  He's currently appearing on NCIS: Los Angeles in the role of Assistant Director Granger. Eric Savin - James Badge Dale James Badge Dale has been in a lot less "geek-friendly" genre fare up to this point, but he's got some on the horizon. Having starred in 24 and The Rubicon, the Black Donnellys star will next be seen in World War Z and Disney's Lone Ranger. 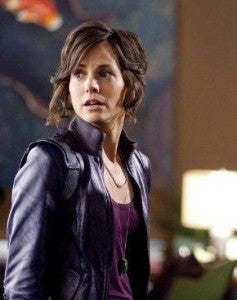 (Ellen) Brandt - Stephanie Szostak This model-actress has done a handful of films that feel like they ought to have been successes; she started out on Dinner for Schmucks and then went to We Bought a Zoo, both of which had star power and name directors/producers behind them. Nothing has really taken off yet, although not for Szostak's lack of connecting with the audience. Now, though, she's gone full-on action star in Iron Man 3 and will next appear in another comic book adaptation, Universal Pictures's take on Dark Horse Comics's R.I.P.D. Fun fact: The screen adaptation of R.I.P.D. is being handled by the same writers who are plugging away at making The Boys into a movie. Mrs. Davis - Dale Dickey A Tennessee-based actress who starred in the segment of the movie set in that state, Dale Dickey is arguably best known for her recurring role on My Name is Earl as Patty, the Daytime Hooker. She's also done a TON of guest work on just about every show on TV, though, including appearances on The X-Files and the X-Files-derived episode of Fox's Bones. She also appeared in J.J. Abrams's Super 8 and has a recurring part of HBO's True Blood.

Iron Man 3: Where Do I Know That Guy From?