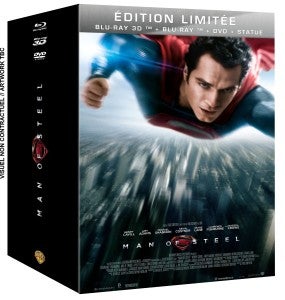 Last week, Amazon France posted the image at left, which is the box art to a Man of Steel Collector's Edition, available via the website for EUR 129.99 (that's $166.79, according to Google). The box includes a DVD,  Blu-Ray, a 3-D Blu-Ray (presumably a digital copy via UltraViolet since that's a thing Warner does now) and a 30 cm (12") statue, which is not pictured. Whether it's a new statue or one of the existing DC Collectibles 12" statues is not known. No release date is listed on the packaging, although the film will reportedly be on DVD and Blu-Ray in November.

Man of Steel To Get Collector's Edition Packed With a Statue...In France, At Least