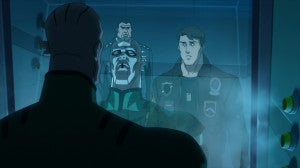 While the story--and especially Hal Jordan's part in it--doesn't seem to follow the comics exactly, tomorrow's release of Justice League: The Flashpoint Paradox is one of the most buzzed-about DC Universe animated feature films yet. Fresh off the major hit of Batman: The Dark Knight Returns, Warner Home Video brings back a handful of familiar faces and sprinkles in some new names to make a film that prepares home video viewers for the world of the New 52, which is coming in the next movie, Justice League: War. One of those returning is Nathan Fillion, the Castle star who has been Hal Jordan in a couple of previous direct-to-DVD movies. In the four clips below, the actor talks about retuning as the iconic DC hero, as well as his own experiences transitioning from fanboy into fanboy icon.