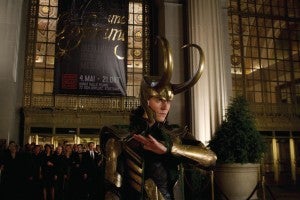 Anything in this interview might be a lie, or at least misdirection. After all, Tom Hiddleston plays Loki, the God of Mischief, in the Marvel Cinematic Universe. Beginning in last year's Thor, it's a role that rolls through at least Thor 2 with a notable pit stop as the central villain in The Avengers, Marvel's hotly anticipated superhero mash-up that sees the stars of the Thor, Iron Man and Captain America movies gather alongside newcomers like Cobie Smulders (as Maria Hill) and Mark Ruffalo (as the Incredible Hulk) to take on Hiddleston's Loki and his mysterious army of alien soldiers. Hiddleston was kind enough to join ComicBook.com for a discussion of Loki's character arc, his work in the Marvel Cinematic Universe and what it's like to work with two very iconic and very different directors in quick succession. Look for excerpts from this interview to be posted online tomorrow as part of a very special episode of our Panel Discussions podcast; Hiddleston's tone and humor "make" the interview as much as the cryptic hints he drops about the plot of Thor 2. Also, he got the first word. Hiddleston: Hey, Russ. How you doing? Just dandy, how about you? "Just dandy?" Well, I felt I'd give you some American slang to thank you for bringing "mewling quim" into our vernacular. [Laughs] Yeah, let's see if that one flies—let's see if it takes off. It's not my proudest contribution to the English language or even Joss's, but it's a good throwdown insult for a comic book badguy, that's for sure. Yeah, absolutely. I still remember when I was a kid hearing Lex Luthor call Superman a "sanctimonious berk." Sanctimonious berk? I think Joss Whedon has definitely topped it. Yeah, but he didn't have the Comics Code to contend with. 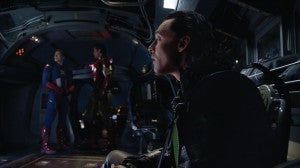 Alright, so onto The Avengers: According to Kevin Feige, you're coming back in Thor 2, but not as the principal antagonist. Are you like Cobie Smulders, who is signed for eight movies or something? Can we expect to see you as Loki until you die? When I first signed my contract to be in Thor, it was an engagement to be in Thor, and then there were five options potentially for other Marvel movies--so The Avengers is one of them, Thor 2 will be number three, so after Thor 2 there are a remaining three options to which Marvel can exercise the right to put me in other stuff. I try not to think about that because it should be one picture at a time. I don't want to take the story or the character for granted, and I don't want to take the audience's affection or disaffection for him for granted. I think if people get bored of Loki, then that'll be it. There's a lot of depth to the character, and if we can keep making him interesting and keep making him new and exciting every time then maybe they'll keep going but I'm not sure that maybe being in loads of movies is a greater contribution than to be great in one of them. The character has grown a lot--he's very different from in Thor but there's a continuity that's been built that makes a lot of sense. It was nice to be able to lay the foundation for the character in Thor and I think the thrill of playing that journey is, it's the journey of a young man understanding the lie at the center of his childhood, which completely breaks his heart. So actually playing Loki in Thor was an exploration of vulnerability and a kind of emotional volatility that was unpredictable. In The Avengers, that's my springboard: Loki's heart is broken but around his broken heart he's built the armor of menace and mischief and self-possession so he's become incredibly destructive and incredibly powerful. And all of his megalomania, his credentials as a badguy, come from that same, damaged place. 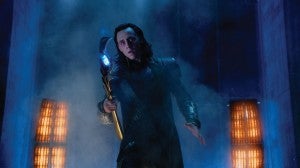 Do you think the way he's vulnerable make him an easy character for you to transition into being someone's subordinate in later movies? I think where we take the character in Thor 2 will be really interesting because I haven't seen the script but I vaguely know the story and I wonder whether there's a glimmer of--I know that he'll have to answer for his crimes. I think Odin will have something to say about what happened in The Avengers. But I think Loki is constantly playing with his own unpredictability and I think that's why he's a master deceiver. So it could be...I'm just trying not to say too much, actually, but I think you'll be surprised by Loki's placement in Thor 2. It's interesting to me that both of the directors you've worked with come with certain expectations. How is it to work with the two directors in rapid succession? It's not just two very different directors but you're playing the same character in the same milieu and you've got to completely change filmmaking styles. Yeah but it's funny that they actually share a lot more than you'd expect. Ken [Branagh, director of Thor] is a huge fan of sci-fi, fantasy and more populist material--much more than his Shakespearean credentials may suggest. And Joss is a kind of closet Shakespearean....Well, not so closeted anymore since he's just putting the finishing touches on his own movie of Much Ado About Nothing. But they both innately understand what makes a film great, which is a great story with great characters and conflict and drama and humor. So strangely they're more similar than they are different. 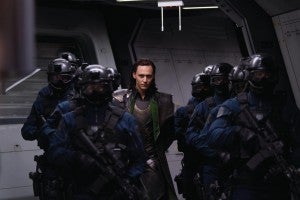 You too, right? You're doing Henry IV and Henry V in the near future, too, aren't you? I've finished them. I spent the winter shooting them so they're just being finished up and scored and they'll be screened as part of the Cultural Olympiad in the UK. A lot of people would look at you and Branagh and question what the hell you're doing in the Marvel Universe but you wrote a very eloquent piece for The Guardian that defended the superhero genre. It's funny becuase The Guardian asked me to write it and I was thinking to myself, "What can I say here?" And I just became aware of my own emotional memory about movies--my own cinematic history, or my engagement with film was as a kid going to these huge blockbusters. It was Superman and Tim Burton's Batman and Raiders of the Lost Ark and if something connects with you as a child, then it has a very formative and deep effect, even if it's dismissible by so-called grown-ups as entertainment. But I think that if you can make a truly great piece of entertainment that's as challenging and rewarding as making a great piece of art. And of course the melodrama of this kind of work is often dismissed by critics but that's the kind of quality that embodies mythology and Shakespeare. Well, it's a contemporary mythology. It's a modern-day way of projecting our humanity on a broad canvas, I think. Superheroes are everything we hope to be: courageous and generous and they sacrifice their own interests to do the right thing and supervillains are all of our darkness instincts--our jealousy, our vanity, our pride and all that stuff.