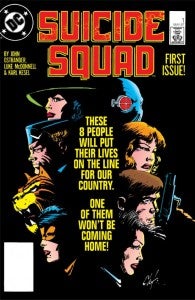 Back in June, Comicbook.com covered a report about a Suicide Squad movie being in development. Since that time, we hadn't heard any more about the movie, so we didn't know the status. Now, Collider.com has an update from producer Dan Lin, who has been out promoting his upcoming Gangster Squad movie. In regards to a Suicide Squad movie, Lin said, "[Suicide Squad] has a script from Justin Marks, but that is on a hold right now.  I think Warner Brothers wants to finish their A-list stories first and then we'll talk about stories like Suicide Squad." While it's not surprising that Warner Bros. would put Suicide Squad on hold to focus on some of their better known properties, it is surprising that the Suicide Squad movie already has a completed script. Most recent speculation tends to point toward Justice League as Warner Bros. next movie after Man of Steel, but according to director Ben Affleck, he doesn't think there is a script for Justice League yet.

Suicide Squad Movie Has Script But Is On Hold