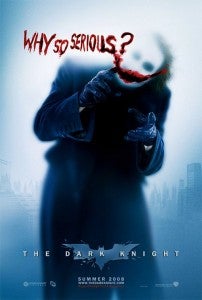 Adding more awards to an already impressive list, The Dark Knight lay claim to five more in last night's Saturn Awards, the annual ceremony put on by the Academy of Science Fiction, Fantasy & Horror Films. While the Academy Awards may have announced that the DC Comics' hero's portrayal played a part in their decision to expand the Best Picture category from five to ten nominees in the coming years, the Saturn Awards richly awarded The Dark Knight in several main categories. Heath Ledger's performance as The Joker was once again singled out for praise, as he won the Best Supporting Actor Saturn while The Dark Knight as a film won for Best Action-Adventure Thriller. The Batman movie also picked up awards in the categories of script, score and special effects. It was a big night for other comic book heroes as well, as Iron Man took home the award for Best Science Fiction film, with director Jon Favreau winning Best Director and Robert Downey Jr. winning Best Actor for his portrayal of playboy turned hero Tony Stark. Receiving a Lifetime Achievement award at the ceremony was Leonard Nimoy, who was recently seen in a brilliant turn as Spock in the newest version of the Star Trek film series.