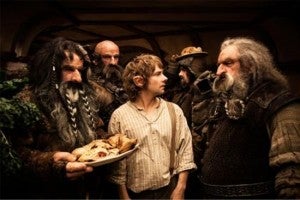 While a $97 million opening may not sound so incredible in the context of a year where The Hunger Games, The Dark Knight Rises and Marvel's The Avengers all broke $150 million on their opening weekends, it's enough for The Hobbit: An Unexpected Journey to break the record for the biggest-ever December box office weekend. That's what it's expected to do after raking in an estimated $37 million yesterday for the biggest-ever Friday at the December box office. Warner Brothers are reportedly hedging their bets a bit, estimating between $80 million and $90 million, according to Deadline. That might be just managing expectations following the way unbelievable box office estimates for The Dark Knight Rises failed to materialize as real money this year. Clearly there were mitigating circumstances there, but Warner may want to keep a relatively low profile this week following another pair of mass shootings that have put the mass muder at Aurora, Colorado back in the headlines. Deadline are also projecting that The Hobbit: An Unexpected Journey might make $200 internationally this weekend.