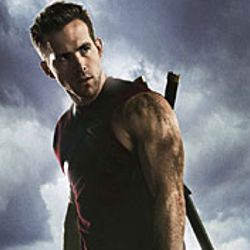 In my previous article, I covered four characters appearing in X-Men Origins: Wolverine who may or may not be readily familiar to those used to seeing four-color adventures play out only on the big screen. In our attempts to always be a servant of the public, here are four more characters and their portrayers from this spring's sure-to-be blockbuster film.

Deadpool - Another graduate of the Weapon X school, Wade Wilson became the wise-cracking Deadpool, a mercenary with accelerated healing, super-strength, hyper fighting ability and teleportation to boot. He began in the pages of The New Mutants and quickly found himself at odds with Cable, but eventually joined him on several missions. Since then he's made various appearances across the Marvel universe, and has become one of the most popular anti-heroes that exist. How he will be shown in the film remains to be seen. Deadpool will be played by Ryan Reynolds.

- While not a major character in the larger X-Men mythos, John Wraith, also known as Kestrel, was a teleporter known for helping his fellow Weapon X teammates in escaping dangerous missions. After years of assignments, he grew suspicious about the project and began to investigate, becoming one of the most paranoid characters out there. While there are other aspects of his character bio that are worth mentioning, some things are better left to the surprise of the screen. Let's say that, shall we? John Wraith will be played by Will.I.Am.

- The man known to many readers originally as Maverick makes his first on-screen debut this week. He was originally teamed with Wolverine and Sabretooth as part of Team X, a secret division of the CIA used to perform dangerous, clandestine missions. He eventually became a part of, you guessed it, Weapon X. After various dealings and adventures with Weapon X and the X-Men's adversaries led to his "death", he reinvented himself as Agent Zero, a new and deadly employee of a resurrected Weapon X project. Agent Zero will be played by Daniel Henney.

- Arguably Wolverine's most ferocious and worthy adversary, Sabretooth has the murderous bloodlust and healing factor to go toe to toe with Wolverine without letting up. He's killed countless people over the years, including some personally close to Wolverine, fought many Marvel heroes, and for a brief time was a member of the X-Men. With claws, fangs and super-strength, Sabretooth was a valued part of the Weapon X program. To say there's a history between him and Wolverine would be an understatement. Sabretooth will be played by Liev Schreiber.