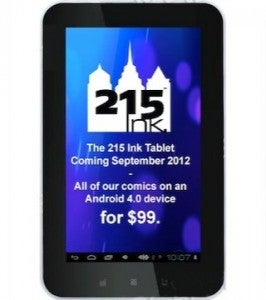 Fans who were surprised to learn that 215 Ink would be offering their entire digital comics library, plus a tablet to read them on, for under $100 can now preorder that device via the company's website, or at least take a better look at the product and its technical specifications than was originally reported. ComicBook.com clarified with 215 Ink's Andrew Del Quadro that customers' cards will be charged at the time of the preorder and their e-reader will be shipped without delay as soon as they're available.

With a 12-month manufacturer's warranty, 4 GB or hardspace and a 7" screen, it seems like a pretty good buy for people looking for an entry-level comics reader. It's a fully-functional Android 4 tablet with access to the Google Play Market, as well, which means that you should be able to load up other comics apps on the device (such as ComiXology or Dark Horse's branded app) and make this your comic book tablet.

There's not a hard date yet for the devices to begin shipping, although the official unveiling will be at the Baltimore Comic-Con September 8-9.