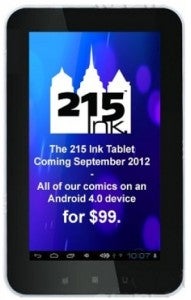 Last night, Bleeding Cool reported that 215 Ink, the publishers behind Blue Moth and Jesus Hates Zombies, would be bringing a little something unexpected to the Baltimore Comic Con on September 8-9: a branded Android tablet. "We felt a lot of new readers were still waiting for a reason to try comics on a tablet device," said President Andrew DelQuadro in a press release, "and this offers a chance to sample the next evolution of the medium at a price point that won't break the bank. We hope this translates into new comic readers and can function as a gateway into all comic formats, digital as well as print." The tablet, apparently, will be your gift if you buy the publisher's entire line of digital titles--that's 215 titles, according to a press release from the publisher. The cost of the bundle is $99.00, and the publisher will have tablets on hand for consumers to demo at Baltimore. ComicBook.com contacted 215 Ink's Andrew DelQuadro through Twitter and learned that it's not a convention exclusive--this is a new product that the publisher will be carrying beginning soon. "Pre-orders go live soon and will ship as soon as they are ready," DelQuadro told us. "Baltimore will be the first con we have them on hand to demo." Presently, the 215 Ink digital copies are sold via an iPad app, which is promoted aggressively on the publisher's website and Twitter feed. There's no indication that taking on their own branded tablet will change that. Certainly, there are any number of Android tablets on the market right now and there are some fans for whom a tablet won't be a huge incentive (you can buy a cheap one at Big Lots for under $75 these days). But to casual fans or the occasional reader who has put off their first foray into digital on grounds of cost, this could be huge. Also, given the amount of data that digital comics take up it wouldn't be surprising to see some fans take advantage of this offer, if only to have a designated comics reader. Since it's a fully-functional Android 4.0 tablet, readers could download the ComiXology app for use on the tablet, as well as other third-party readers like Amazon's Kindle app or Barnes & Noble's Nook app. Some watchers have long expected DC or Marvel to brand their own tablet--it would provide the direct market with access to readers on which fans could buy digital without the shops feeling too betrayed, and fans have even suggested that there could be certain special features that the reader could only access from inside a comic book shop or by scanning an exclusive retailer barcode. No major publisher has made a move in this direction, but expect everyone to be watching 215 Ink. If this takes off, it could become something that publishers--or even Diamond itself--might try to emulate. The publisher, who has already launched a half-dozen new titles this year, sees it the same way. "We feel this is a start of a banner year for 215 Ink," said DelQuadro, "with the tablet, our new titles and the recent sell out and subsequent 2nd printing of our critically acclaimed series Beware ..., we're ripe for the whole industry to take notice."

215 Ink Offers an Android Tablet, Their Entire Catalog for $100