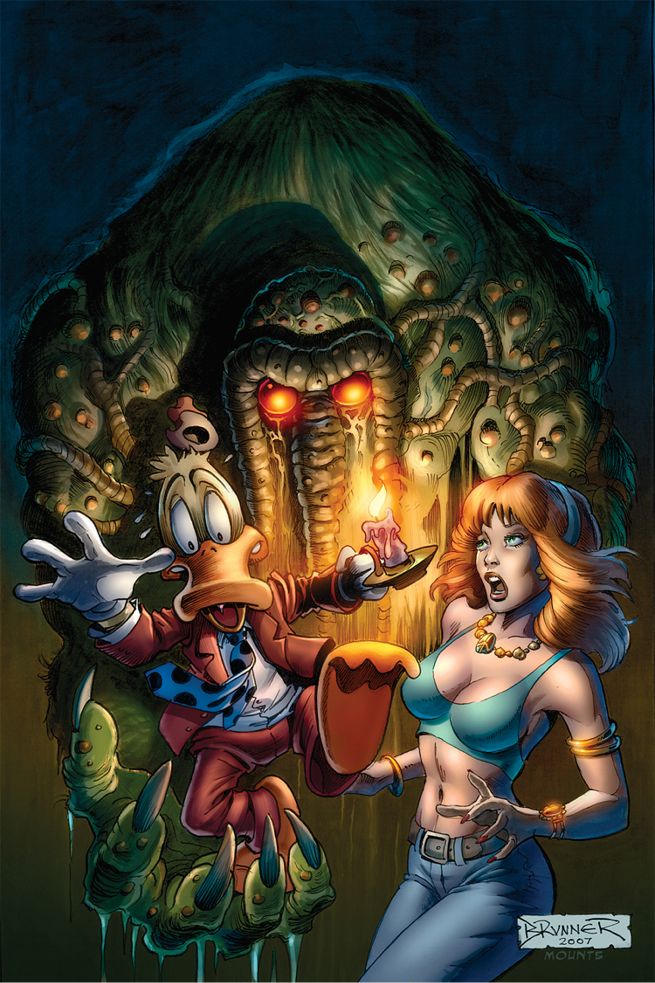 In a cameo that absolutely nobody saw coming, Howard the Duck, the intergalactic duck sent to Earth against his will, became a part of the modern Marvel Cinematic Universe when he appeared in the mid-credits teaser of Guardians of the Galaxy.

Created by Steve Gerber and Val Mayerik in 1973, Howard the Duck is one of the most fascinating and controversial comic book characters to be published by Marvel Comics over the past 50 years. Since his debut in Adventures into Fear #19, Howard starred in his own series, received a significant number of votes in a presidential election, became a symbol of creator rights in the industry, and was featured in a 1986 film (produced by Lucasfilm an Universal Pictures) that many consider to be one of the worst movies ever made.

Gerber's Howard the Duck series was notable for its political and social satire and for its portrayal of a character with absolutely zero powers (despite his claims as being a master of "Quack Fu") in a world of superpowered heroes and villains. After a few scattered appearances throughout the 80s and 90s,, in more recent years Howard has played a small role in many of Marvel's major events including Civil War and Fear Itself.

For those who still don't quite grasp why some people are losing their minds over his cameo in Guardians, here are five great Howard the Duck stories that should paint a more complete picture of this character's important, if not offbeat role in the comic book industry. 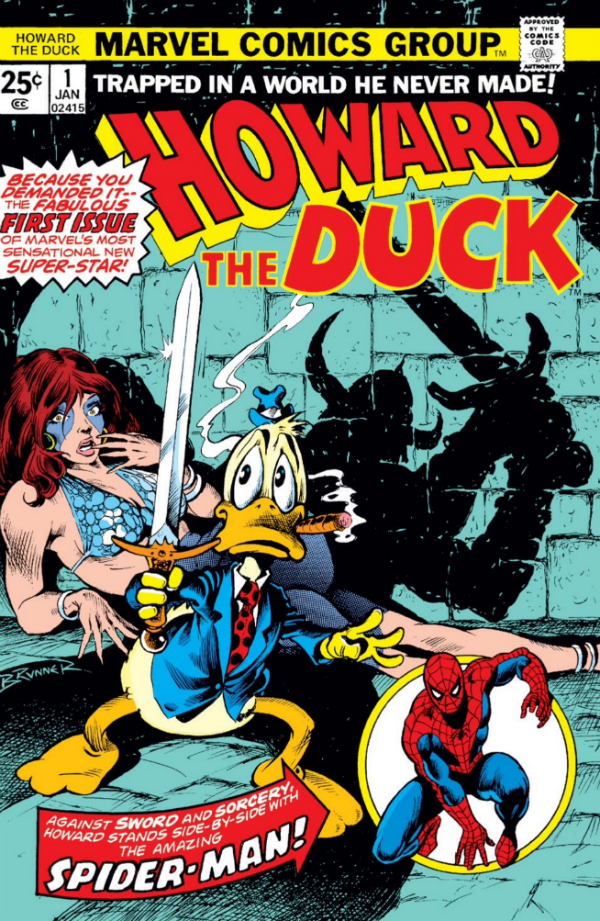 While not Howard's first appearance, the debut issue of Howard the Duck puts Steve Gerber's extraordinarily weird and satirical world on full display. The comic opens with the titular "hero" contemplating suicide and then deciding to climb a tower made of credit cards to do so. While making his potentially fateful ascent, Howard meets the beautiful Beverly Switzer for the first time, who, for the next 35-plus years would function as his sidekick and sometimes girlfriend (and was portrayed by Lea Thompson in the 1986 film).

If reading about a cranky, suicidal, humanoid duck in a Conan the Barbarian outfit facing off against an accountant who is seeking a cosmic adding machine in order to achieve god-like powers isn't enough to stoke your interest in this series (seriously, what else do you need?), Gerber and penciler Frank Brunner work in a random cameo from none other than the Spider-Man, who flies out to Howard's hometown of Cleveland to get pictures of an alleged talking duck for the Daily Bugle. Of course Spidey ultimately teams with Howard to defeat the villain Pro-Rata, with the two of them taking turns saving each others keisters before the comic ends. 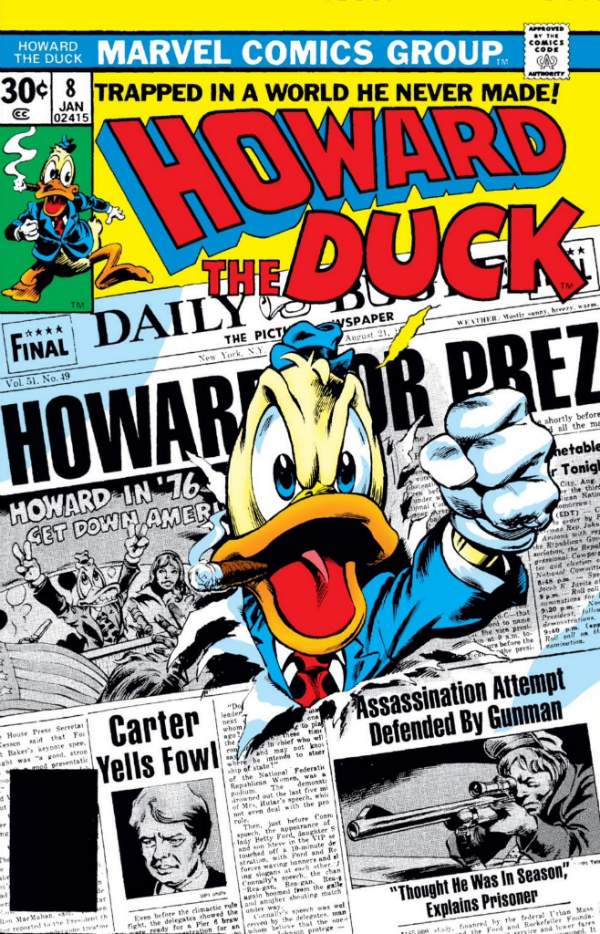 Considering the general political unrest in the post-Vietnam, post-Watergate United States in the mid-1970s, it was only fitting that Gerber would use Howard and his series as a means to comment on the very real 1976 presidential election between Republican incumbent Gerald Ford and Democratic challenger Jimmy Carter. In the comics, Howard becomes the standard bearer for the "All-Night Party," with the slogan "Get Down, America!"

In this two-part story, the presidential election is quickly approaching, and Howard learns through a PR consultant that he is the candidate most likely to be assassinated. Proving that American politics have been bitterly divisive for decades, a fictitious poll reveals that 48 percent of voters want Howard dead, while 30 percent support him and 22 percent are undecided.

Despite having some not exactly mainstream views on certain political issues (like finding funds to develop more powerful military weapons by having soldiers live in caves rather than barracks), Howard's bid is actually upended by a scandalous (and doctored) photo of he and Beverly in a bathtub together – more proof that either Gerber was extraordinarily ahead of his time in terms of satire, or that American politics really haven't changed all that much over the past 40 years.

The story ended up being very influential in the real world of politics. Howard and the All-Night Party received a few thousands write-in votes in the 1976 presidential election. 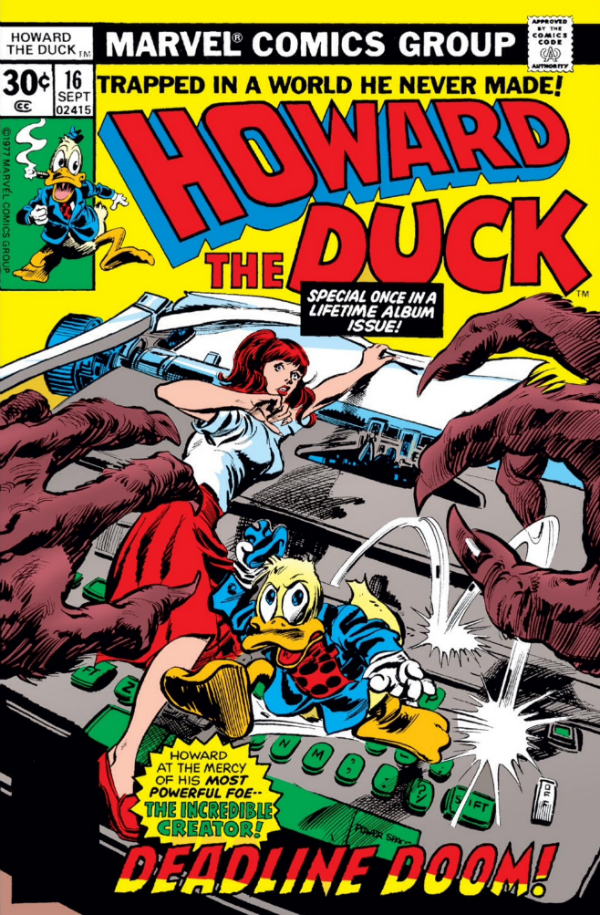 While not "technically" a Howard story, "Zen and the Art of Art of Comic Book Writing" is one of the most famous comic books of the 1970s and a prime example of Gerber's eccentricities (and tardiness) that led to him eventually getting fired from Howard the Duck.

A few issues earlier, Gerber had been promoted to editor of Howard the Duck, giving him full autonomy over the series (he was also still scripting the book). As the story goes, Gerber was late with his script for Howard the Duck #16, but rather than publish a reprint, he submitted a bunch of long-form text essays explaining why he had such a hard time consistently making deadline. These blocks of text were then accompanied with a series of Howard illustrations leading to this bizarre but undeniably memorable comic book being published.

Of course, the existence of Howard the Duck #16 does beg the question of how Gerber had the time and wherewithal to fill more than 20 pages of a comic with very dense text, but was unable to script an actual comic book story. But beyond these quibbles, the comic has since served as exhibit "A" in the sausage-making process better known as creating comics.

Marvel editor-in-chief Jim Shooter would fire Gerber about a year later for his frequent tardiness, leading to a bitter dispute with the company over creator rights. To fund his lawsuit, Gerber collaborated with industry icon Jack Kirby, to create the independent Destroyer Duck comic. 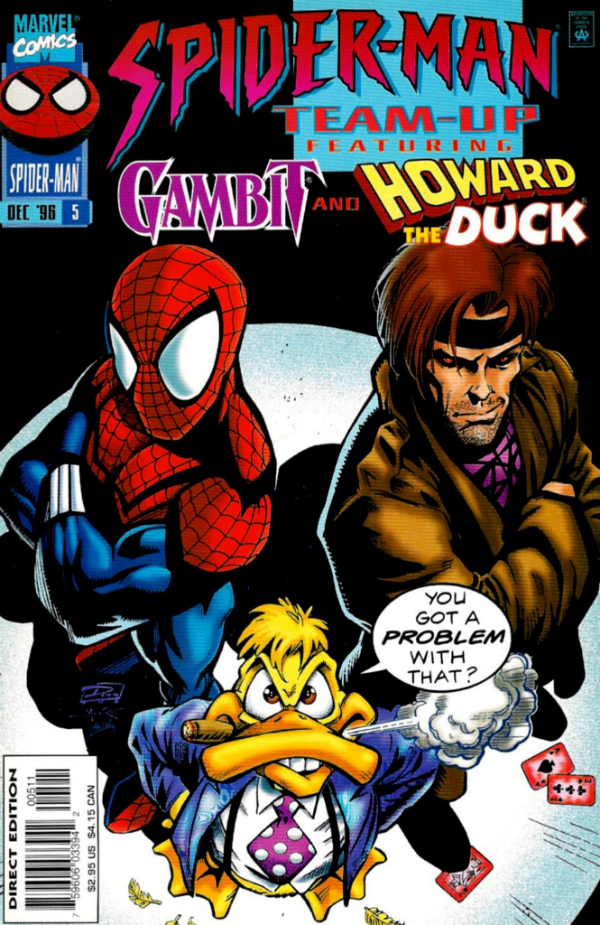 Despite having next to nothing in common, Howard the Duck and Spider-Man were frequent teaming partners over the years, including the debut issue of Howard the Duck (see entry #1) and the Alan Kupperberg scripted/penciled Marvel Team-Up #96 (which saw the duo work together to fight the fad-hating villain Status Quo). But arguably the most significant Duck/Webhead pairing was this 1996 issue of Spider-Man Team-Up which saw Gerber return to the character he created for the first time in nearly 20 years on the condition that he could write the story as part of a Savage Dragon/Destroyer Duck comic he was working on with Erik Larsen and Image Comics. The book's editor, Tom Brevoort agreed and the end result is this extraordinarily fun and zany story that takes place right in the heart of the Ben Reilly as Spider-Man "Clone Saga" days.

The crossover gave Gerber an opportunity to work in some of his greatest hits as a Marvel creator, including the infamous Elf with a Gun villain that the author introduced during his mind-blowing run on the Defenders in the 1970s. Savage Dragaon makes an obligatory appearance in the comic, and both Peter Parker and Ben Reilly find their way to Cleveland to help out Howard and Beverly against a homicidal elf. In other words, just an average day in the 1990s when it comes to comics. 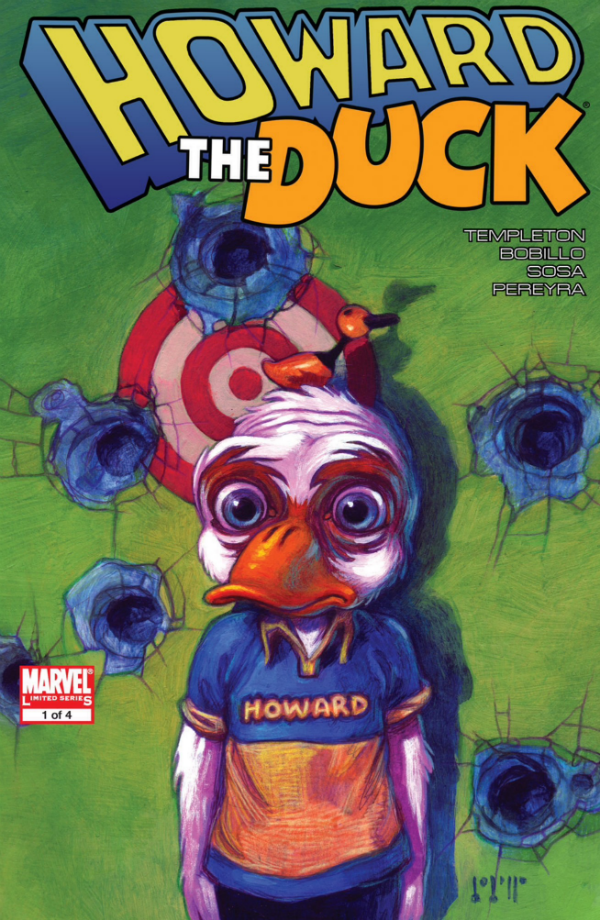 This Ty Templeton/Juan Bobillo miniseries from 2007 was part of a late-2000s revival of Howard the Duck content. Templeton had previously demonstrated his grasp on Howard's caustic and biting sarcasm when he scripted the duck-centric backup story in the Civil War: Choosing Sides one-shot. In this miniseries, Templeton and Bobillo satirize our culture's obsession with creating instant celebrities after an internet video featuring Howard transforms him into a household name. Larry King and Jon Stewart both make cameos in this series, along with long-time Marvel villain M.O.D.O.K. Marvel's most famous attorney Jennifer Walters, aka, She-Hulk joins the storyline as a champion for Howard's desire to have his American citizenship restored.

The miniseries is probably the closest any creative team has gotten to capturing the off-the-wall anarchy of Gerber's original Howard incarnation. In his script, Templeton seems to understand that Howard generates the most laughs when he's matter-of-factly ripping on our often bizarre political and cultural norms.