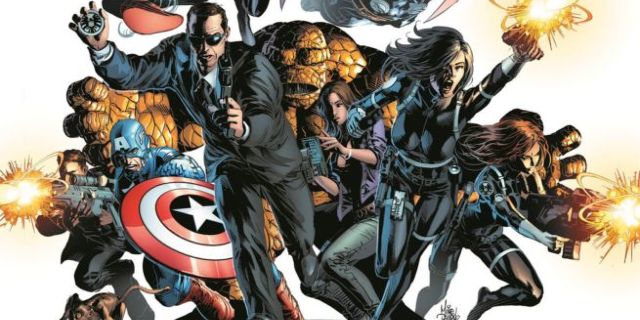 Marvel's television universe has been officially linked to its comic book line with this week's release of S.H.I.E.L.D. #1 by Mark Waid and Carlos Pacheco. This new series introduces the comic book iterations of S.H.I.E.L.D. agents Melinda May, Leo Fitz and Jemma Simmons, who viewers of ABC's Agents of S.H.I.E.L.D. are already well familiar with as some of the key members of Agent Phil Coulson's team.

But while Waid has his work cut out for him in taking characters from one medium and breathing new life into them for a different format, there's also an entire library of established Marvel heroes and villains out there that could be mined for this new series that will should continue to link print and cinema/television. Here's seven Marvel superstars for Waid to start with as S.H.I.E.L.D. progresses through its first handful of issues. 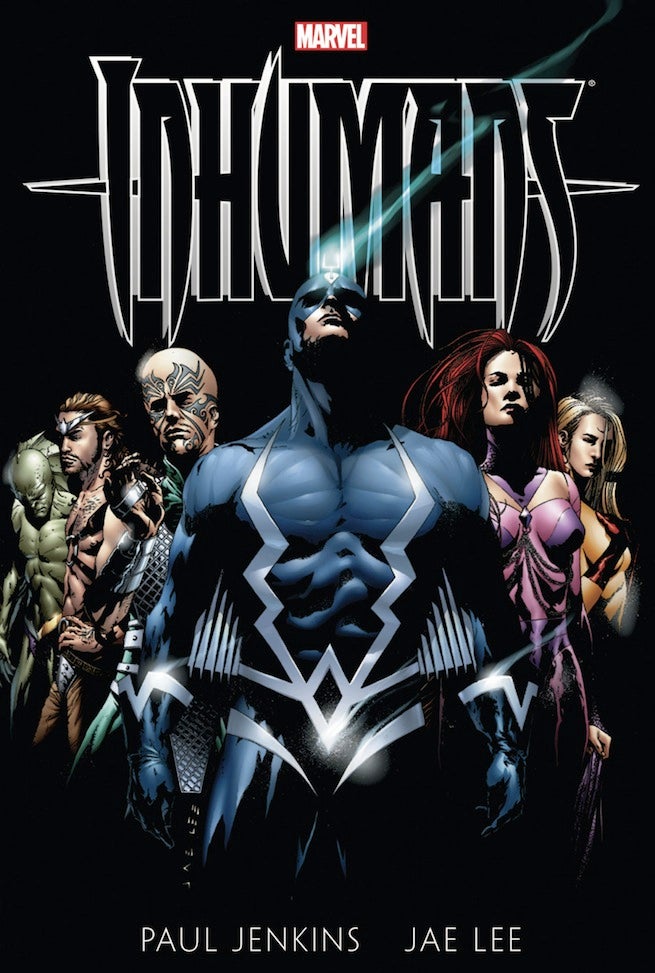 While no character on Agents of S.H.I.E.L.D. has yet to utter the word "Inhuman," it's fairly obvious to those following the clues and Easter Eggs that the race of superpowered beings better known as the Inhumans have factored in to some very key moments in the show's first two seasons. With Marvel still in the midst of a big time Inhumans push, it would only make sense if the television and comic book world's connected and the Inhumans made some semblance of a cameo in the new S.H.I.E.L.D. series. The Inhuman royal family of Black Bolt, Medusa and Co. is certainly a good place to start if Waid is going to utilize any of these characters, but with Charles Soule's Inhumans series currently introducing new Inhumans every issue, the options for television/comic book synergy are endless. 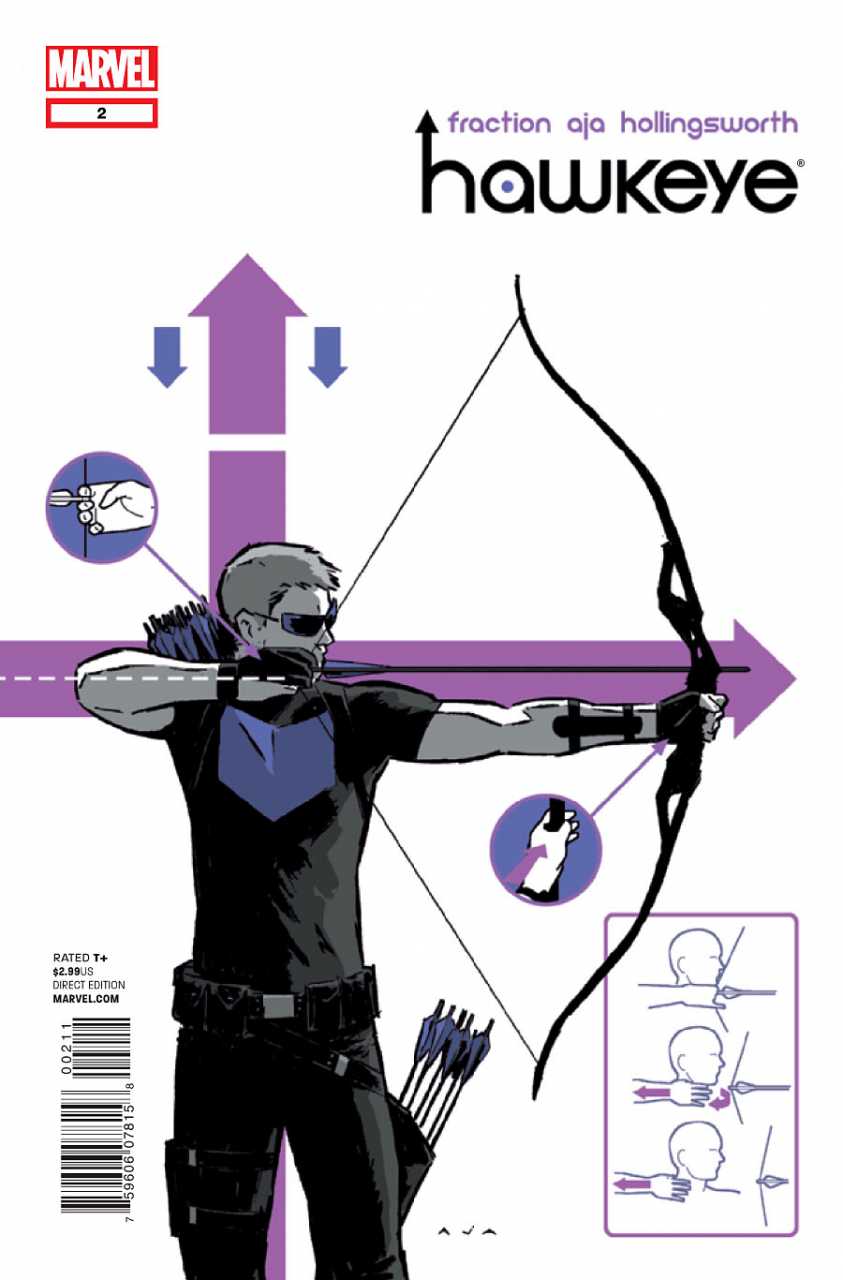 It's not like Hawkeye is a character that currently lacks for exposure in the comic book universe. But perhaps if he's included in a compelling way in S.H.I.E.L.D., that could open a few doors for Jeremy Renner, the actor that portrays Clint Barton in the Marvel Cinematic Universe, to make a guest appearance on Agents of S.H.I.E.L.D. It's not like it would be all that difficult to connect the two universes via Barton. Earlier this season, Bobbi Morse, aka Mockingbird, aka the ex-wife of Hawkeye, debuted in Agents of S.H.I.E.L.D. and while the television version of the character is currently romantically entangled with fellow agent Lance Hunter, who's to say Bobbi couldn't have once had a fling with a certain master archer? 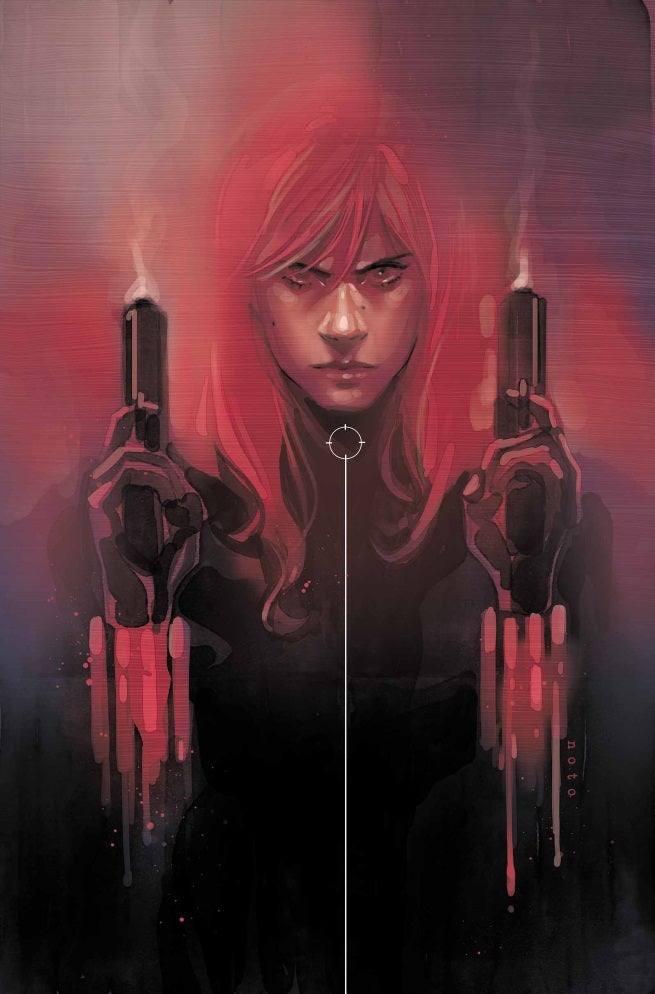 Like Hawkeye, Black Widow is not a character in desperate need of a print revival and is enjoying success in her very own solo title thankyouverymuch. However, you can never have too much Natasha in your life, so maybe Waid can script her into an issue or two of S.H.I.E.L.D. At the very least, a Natasha cameo/storyline could be used to elevated fellow femme fatale Melinda May's role in the comic book world. As the second-in-command to Coulson, viewers of Agents of S.H.I.E.L.D. have witnessed May kick some serious keister many times over. So have her team-up with a upper crust assassin like Widow (or even have one of those typical superhero misunderstandings that we sometimes get), thereby establishing May on Natasha's level, just in case there's anybody out there picking up S.H.I.E.L.D. who doubts May's awesomeness. 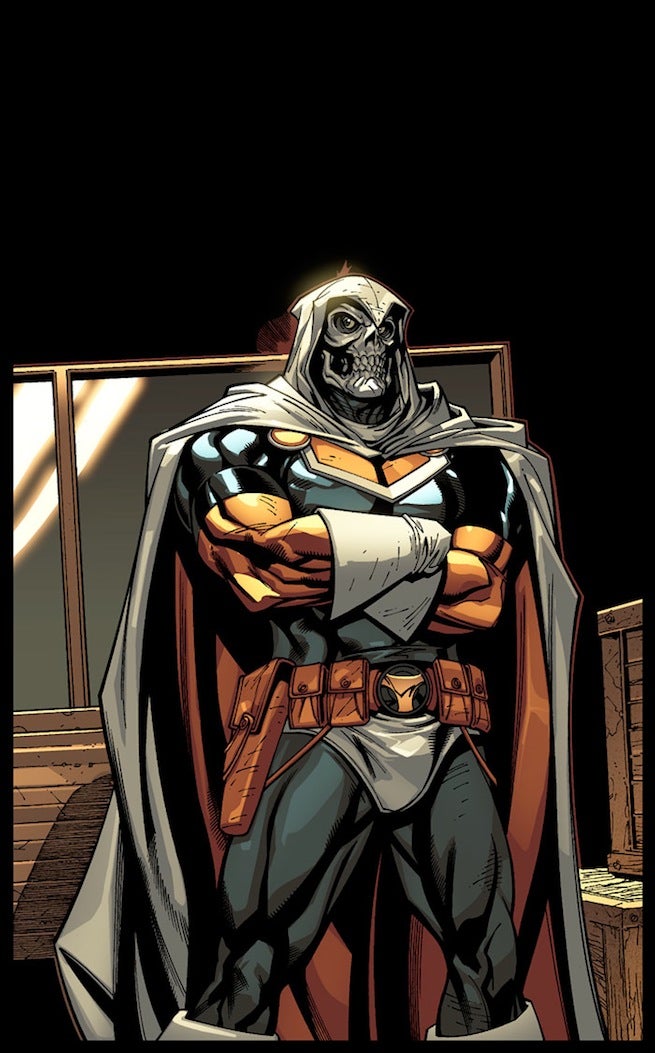 There's already been a fair amount of speculation regarding the absence of S.H.I.E.L.D agent-turned-Hydra turncoat Grant Ward's absence from the cast of S.H.I.E.L.D. #1, with this ComicBook.com article making a case that perhaps Ward is actually the longtime villain/anti-hero, the Taskmaster. Similar to Skye, who has since been revealed to be Daisy Johnson (more on that in a bit), the television iteration of Ward could very wall be unveiled to be a character that already exists in the comics, hence him not being included in the S.H.I.E.L.D. series debut.

Either way, Taskmaster would be a heckuva lot of fun squaring off against Coulson and company. A S.H.I.E.L.D. sleeper agent who loses his memories on a mission and thus turns appears to be a bad guy, Taskmaster is an expert marksman and fighter who can pick up and master nearly any combat skill just by observing. He's clearly got a history of fighting for and against S.H.I.E.L.D. and his inclusion in the comics would be easy to adapt to the small screen (again, even if it's not Ward in the role). 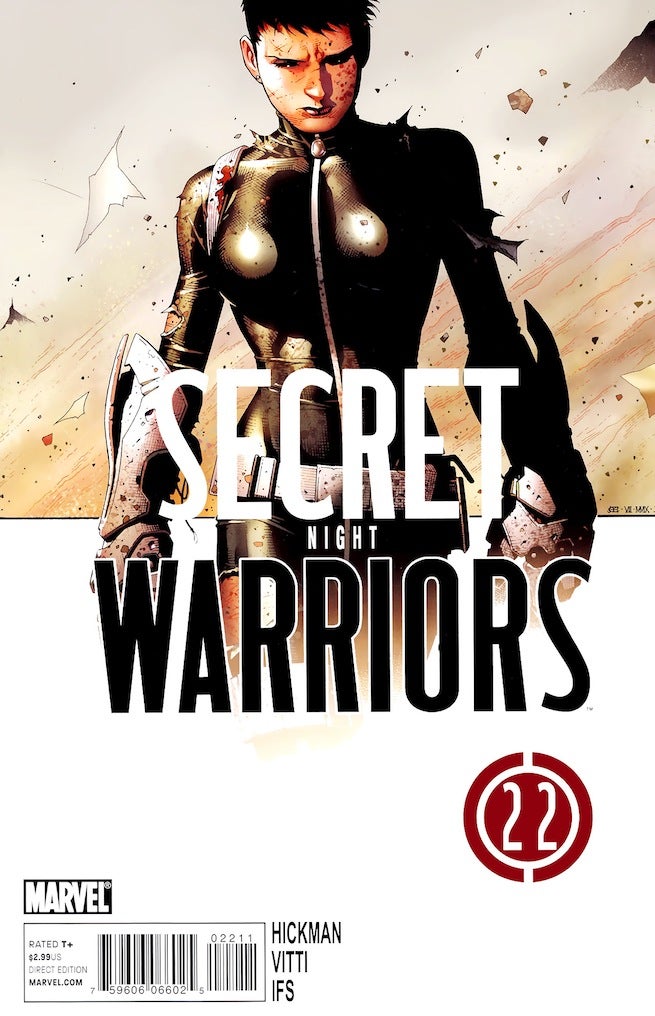 It's probably only a matter of time before Daisy Johnson, better known as her superhero alias, Quake, shows up in S.H.I.E.L.D., especially after the big reveal of the Agents of S.H.I.E.L.D. mid-season finale about her current existence in the Marvel Cinematic Universe (as the Team Coulson recruit, Skye). However, even without the Skye/Daisy connections, it would make sense for Johnson to show up in a S.H.I.E.L.D.-centric comic book series. She was arguably the main character of the Secret Warriors series (which Agents of S.H.I.E.L.D. has judiciously mined for content during its first two seasons) and was even named director of the agency after Nick Fury retired.

The only caveat to using Quake in S.H.I.E.L.D. would be the potential of spoiling her ascension through the ranks for current Agents of S.H.I.E.L.D. fans who are not familiar with the character's print origins. S.H.I.E.L.D. could always retcon a few things so Daisy's print and MCU biographies are more harmonious, but it seems a little silly to reimagine a character that only debuted in the comics 10 years ago. 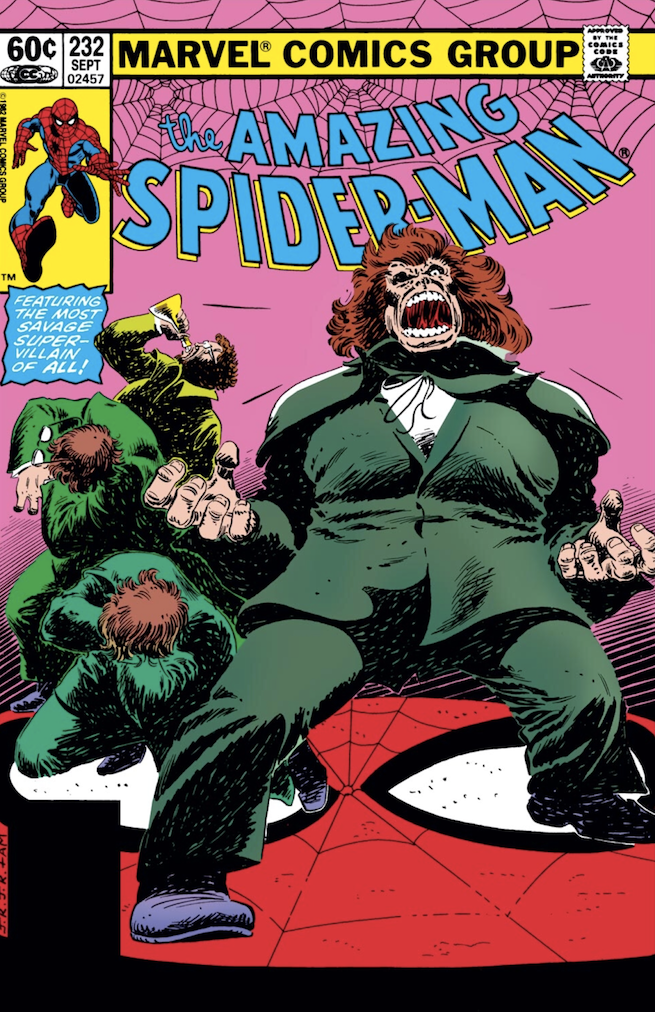 Everything fell into place for comic book fans when the Agents of S.H.I.E.L.D. character being portrayed Kyle MacLachlan (aka, Skye's father), revealed himself as Calvin Zabo, better known as his supervillain persona, the erratic Mister Hyde. Zabo, of course, is the comic book father of Daisy Johnson. So if Daisy/Skye is going to make an appearance in S.H.I.E.L.D., then it would make sense that her troubled/sociopathic father would be involved somehow.

It's not like Zabo's only claim to fame is being somebody's daddy either. Over the years, Hyde has gone toe-to-toe with some of Marvel' s greatest heroes and has been a member of some of the industry's deadliest rogues stables, like the Masters of Evil and the Thunderbolts. So plugging Zabo into S.H.I.E.L.D. would definitely give Coulson's team an instant (and worthy) nemesis to fight. 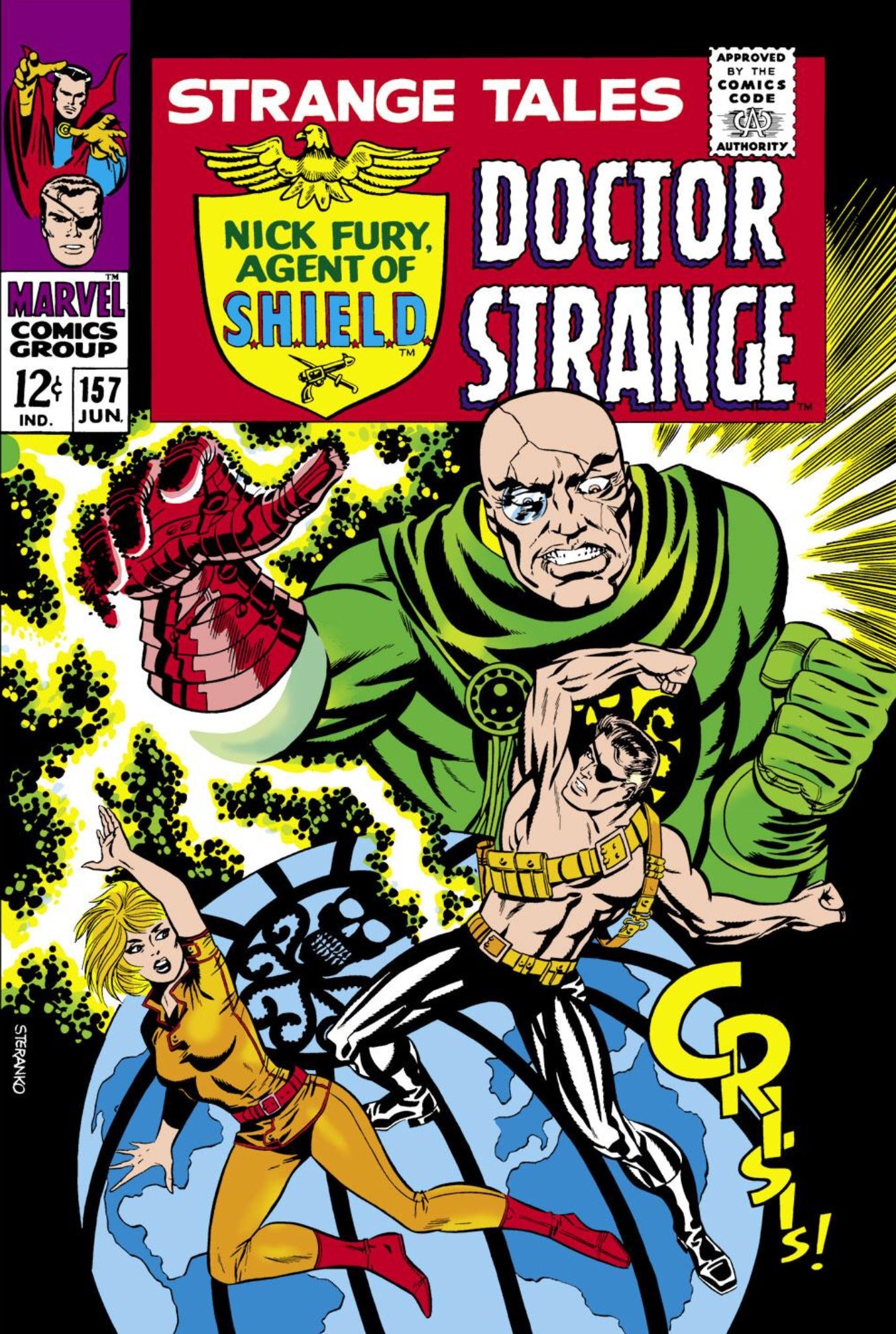 After appearing in the mid-credits teaser in Captain America: Winter Soldier, longtime Nazi/Hydra terrorist Baron von Strucker is expected to play a much larger role in next year's Avengers: Age of Ultron. So Marvel should prepare moviegoers for the character than by introducing him in the pages of a new comic book series that will, in all likelihood, explore the adversarial relationship of S.H.I.E.L.D. and Hydra.

The only catch is that the last time comic book readers saw Strucker, he was getting shot in the head by Fury (in the final chapter of Secret Warriors). But when does a comic book character let a petty little problem like death get in the way of making a comeback? Sooner or later, Marvel is going to have start rebuilding Strucker in the comics if they intend to use him on the big and small screen. S.H.I.E.L.D. is the best place to start.