In 1963, Mushi Productions debuted a little anime known as Astro Boy and simultaneously popularized a new medium of entertainment. Today, anime stands as one of Japan’s largest film genres and has made its way into homes all over the world. Hundreds of original or adapted anime series or features are released by thousands of artists abroad, but the sheer volume of it all can be overwhelming for even the biggest anime lovers.

Here at ComicBook.com, we’re taking a step back and looking through some quintessential anime series which fans should put on their to-watch list. You can check out seven of the best series which anime has ever had to offer in the following slides.

Fist of the North Star

If you are a fan of martial arts, then you will want to check out Fist of the North Star as soon as possible. Known as one of the first prototypical seinen anime series for men, Fist of the North Star combines the gore of Mortal Kombat with the insane combat skills of Bruce Lee. The show debuted in 1987 and follows a man named Kenshiro in a post-apocalyptic world. The man is the only student trained in the deadly art of Hokuto Shinken, and he uses his skills to protect the innocent from burgeoning corrupt officials. Armed with bulging muscles and an eye for justice, Kenshiro spends his life fighting enemies in increasingly violent ways and making them pay.

After more than 40 years, Lupin the 3rd still reigns as one of the best adventure comedies in anime. The original series was co-directed by Studio Ghibli’s Hayao Miyazaki and bears the animator’s signature genius. The anime follows an international thief Arsène Lupin III and his ragtag team of vagabonds. The show follows their various heists as they complete absurd missions and desperately try to evade Inspector Heiji Zenigata VII who’s made it his life’s goal to capture Lupin at all costs.

The Rose of Versailles

Should shojo be more your style, then it’s time you were introduced to The Rose of Versailles. The 1979 series is known as one of the first popular historical romances to hit anime, and The Rose of Versailles became a quick hits with women of all ages. The series follows a young girl living in pre-Revolution France. Named Oscar François de Jarjayes, the girl has been raised as a man her entire life so that she can inherit her father’s estate, but she begins to feel conflicted about her alter-ego when she falls in love with a servant boy named André. Torn between love and status, Oscar must decide who she will stand with as revolution dawns upon the French state, but either route will lead her to tragedy.

Created in 1998, Cowboy Bebop is one of the more recent anime series to find itself canonized as a classic, but it has more than deserved the award. The gritty anime series is considered to be one of the best shows to ever come from the medium, and much of its reputation is thanks to Spike Spiegel’s charm. The protagonist is the leader of a spacecraft known as Bebop and works as a rogue bounty hunter in space. Along with his crew, Spike works various jobs and gets drawn into intergalactic gangbangers as he desperately tries to escape his past life as a syndicate hitman. However, his former posse refuses to let Spike go so easily, and the two clash in increasingly heart-wrenching ways.

These days, there are few sub-genres in anime more popular than sporting stories. You can find shows based on anything from volleyball to swimming and even card games - and we have Fighting Spirit to thank. The show debuted in 2000 and revolutionized the way sporting anime series balanced both action and character development. The show follows a high school student named Ippo Makunouchi who was often bullied. After a run-in left Ippo with serious injuries, a professional boxer takes interest in the student and begins training him. From then on, the anime tells Ippo’s story as he continues to fight for championship titles and gradually sheds his shy nature as he grows more confident in himself.

Never has an anime been so appropriately named. When Revolutionary Girl Utena hit television in 1997, it was unlike anything previously aired. The gender-bending series singlehandedly made yuri - or female/female - anime popular with its outrageous humor and unapologetic stories. The anime follows a girl named Utena Tenjou who desires to become a prince. Her tomboyish behavior puts her at odds with her peers, but Utena pays little attention to their scorn. One day, she meets a fellow student named Anthy Himemiya, a girl locked in an abusive relationship. Utena falls for the girl and vows to protect her, but Anthy’s title as the ‘Rose Bride’ spells trouble when others try to claim her beauty. Luckily, Anthy has Utena at her side to protect her. 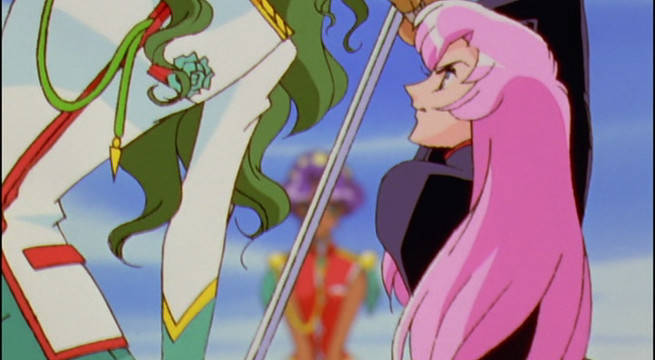 When Toei Animation debuted Dragon Ball in 1986, the company had no idea that it would kick off a franchise that still thrives today. The original anime was one of the first wildly popular series outside of Japan, and fans from all over fell for its hero named Goku. The show follows the young boy as he and various friends go out in search for seven mystical items known as Dragon Balls. Trained in martial arts, Goku uses his combat skills to collect the balls from enemies, but not everything goes as planned when foes like King Piccolo and others covet the items as well.