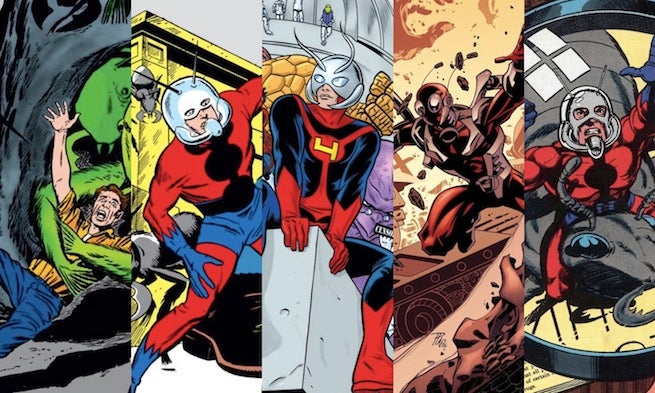 It’s been a big week for Marvel’s tiniest hero, Ant-Man. A day after the official debut of the trailer for this summer’s Ant-Man film from Marvel Studios (starring Paul Rudd as Scott Lang), a new comic book series by Nick Specner and Ramon Rosana published its first issue (with Lang in the titular role, ‘natch).

Ant-Man is actually one of Marvel’s oldest heroes, with a number of different characters playing the part over the years, most notably Hank Pym (the original), Lang and Eric O’Grady. Since there’s so much buzz about Ant-Man these days, we thought we’d spotlight eight key moments in the character’s history, covering all of his personas and iterations. 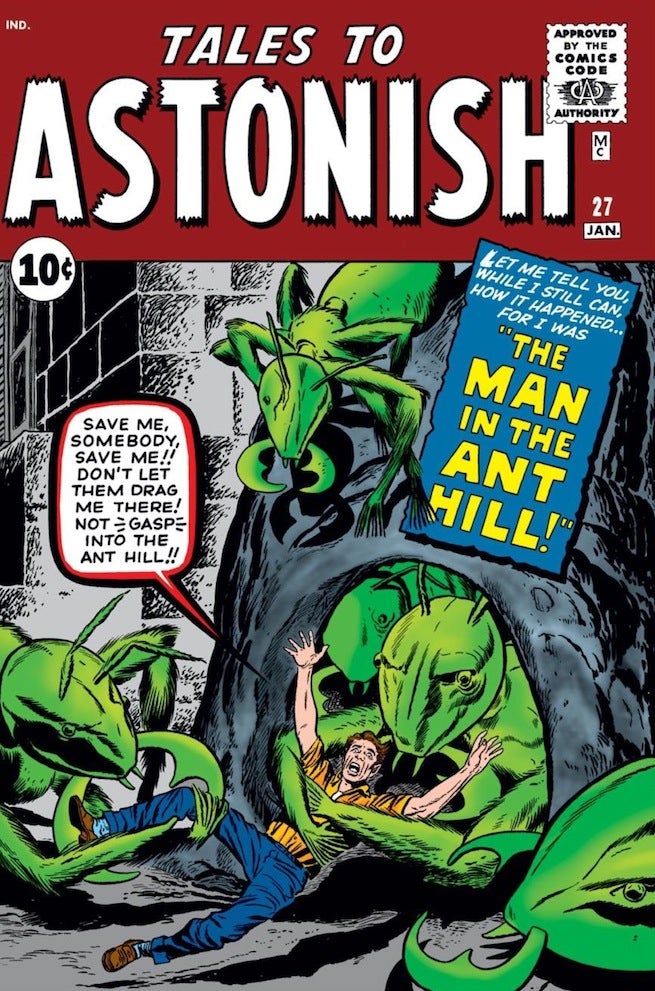 The first appearance of Henry Hank Pym is actually presented as just another monster/horror story (the norm for Tales to Astonish during this era) with an overzealoous scientist that doesn’t consider the consequences of his miracle invention (in this case, how his shrinking formula would make him highly vulnerable to a potentially fatal ant attack).

Just in case the reader wasn’t convinced that Tales #27 was designed to be a done-in-one story, the comic ends with Pym dumping his miracle potion down the drain so that no one is tempted to use it again. But obviously Stan Lee and Jack Kirby saw potential in Pym and the tiny-verse or we would have never gotten … 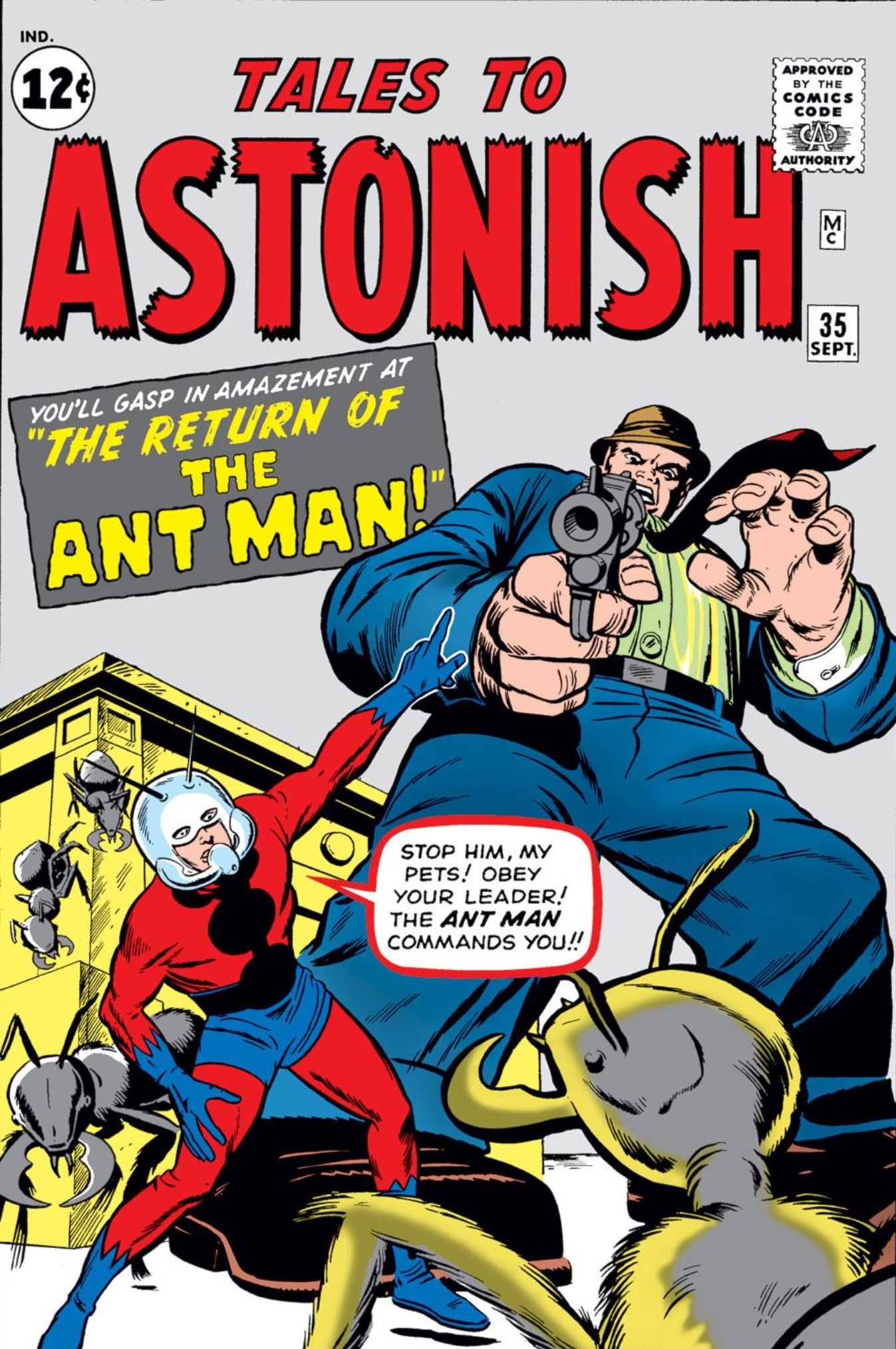 Dubbed "The Return of the Ant-Man," Lee and Kirby bring back Pym and decide to transform Tales to Astonish from a monster/scifi book into its newest superhero series. Despite dumping his formula at the end of his first appearance, Pym obviously keeps some in storage (just in case he felt daring enough to be one with the ants again). And as a means to prepare himself for his transformation, Pym develops a special helmet that allows him to communicate with ants (similar to how they use their antennae) while also creating a special mesh suit that will protect him against insect bites.

As was often the case with early Silver Age stories, in this comic, Pym gets to flex his tiny superhero muscles against evil Communists. When a couple of "pinko" thugs attempt to steal an anti-radiaiton formula from Pym, he takes his new costume and officially becomes Ant-Man for the very first time in order to save the day. Going forward, Tales to Astonish would continue to track Pym’s adventures as both Ant-Man and some of his other superhero personas. 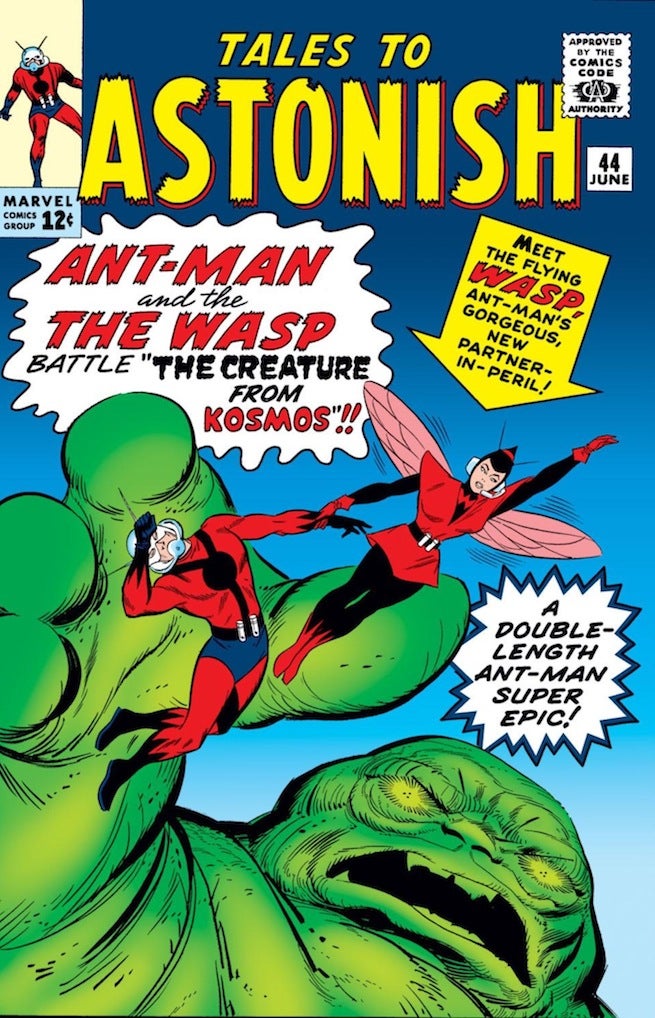 This comic marks the first appearance of Janet van Dyne, aka the Wasp, indisputably the most important supporting character in the history of Ant-Man comics, and one of the all-time great industry heroines to boot. In fact, Wasp’s introduction was considered such a big deal, Marvel actually went ahead and doubled the size of this story, giving Pym more than 20 pages for the first time.

Wasp would co-headline Tales to Astonish going forward and was also one of the founding members of the Avengers when that superteam was launched by Marvel in 1963 (she even suggests the name "Avengers"). However, here, she is introduced as a sidekick and potential love interest to Pym, who also bears a striking resemblance to the scientist’s late wife (whose tragic death we also learn about in this issue). Janet adapts to being a dimunitive superhero rather quickly, and together with Pym. the duo defeat the green blob of a villain Pilai, an alien from the planet Kosmos. 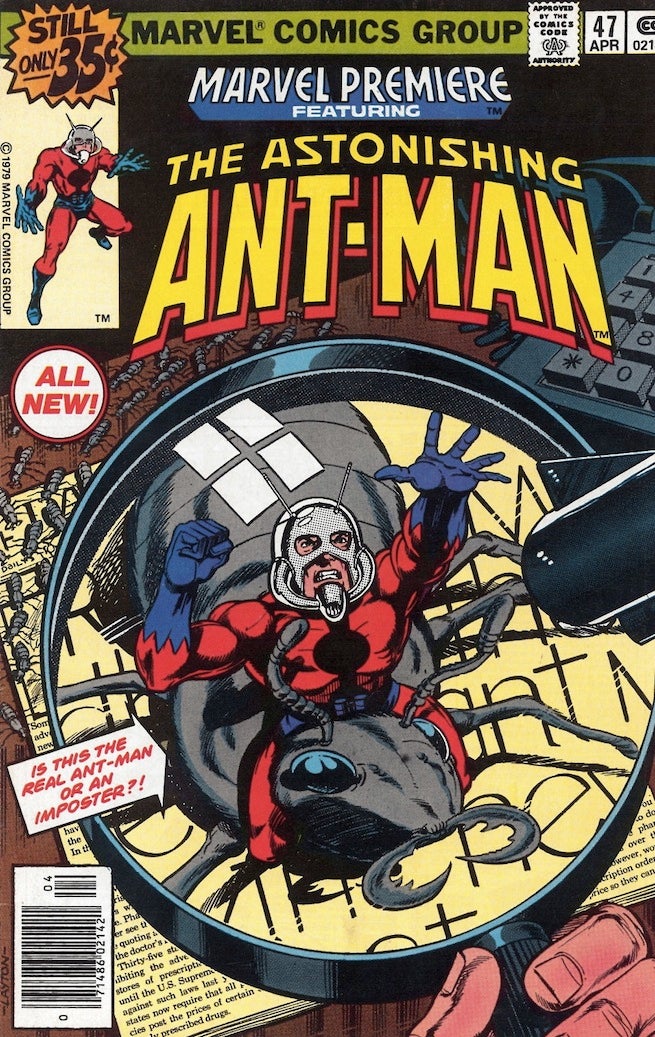 Flash forward more than a decade later to 1979 and the dynamic creative team of David Michelinie, John Byrne and Bob Layton introduce to the world the second Ant-Man (and the star of the current comic book series and this summer’s film), Scott Lang. Lang had actually debuted a month earlier in an issue of The Avengers as an employee of Stark Industries, but in this two-part Marvel Premiere story, readers get a more fleshed out origin, including his sketchy past as a felon, and his very close relationship with his daughter Cassie (who would later join the Young Avengers).

Lang is immediately introduced as a tragic hero of sorts who breaks into Pym’s home and steals his Ant-Man equipment as a means to rescuing a doctor who could save Cassie’s life. As a result of the complex reasoning behind Lang’s dubious actions, Pym absolves him of his crimes, formally ushering in the next era of Ant-Man. It’s not like Pym – who operated more frequently as Giant-Man or Yellowjacket – needed the Ant-Man costume and gadgetry anyway. 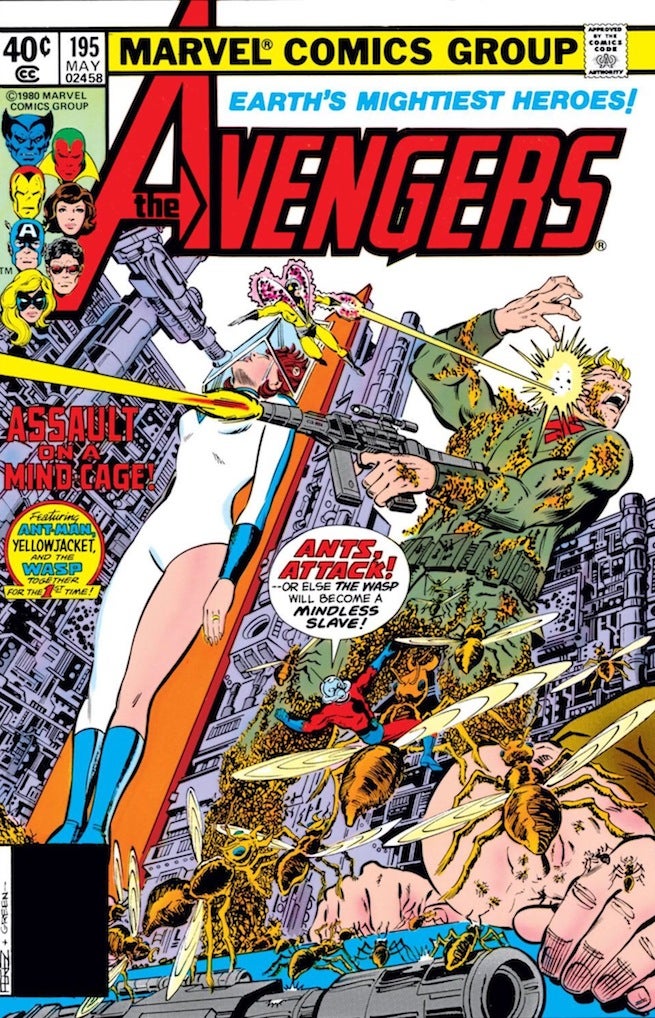 Less than a year after first being introduced, Lang immediately proves his worth to Earth’s Mightiest Heroes, assisting the Avengers in rescuing the Wasp from the evil Taskmaster (who made his first appearance in this storyline), as well as formally teaming up with Pym (Yellowjacket) for the first time ever.

Unfortunately, the tiny trio are overpowered rather effortlessly by the Taskmaster (who reveals that he has the uncanny power of photographic reflexes). And even when the full-sized Avengers come to the rescue, Taskmaster overpowers them until he runs into the cyborg Jocasta who he is unfamiliar with, and thus, unable to physically mimic. 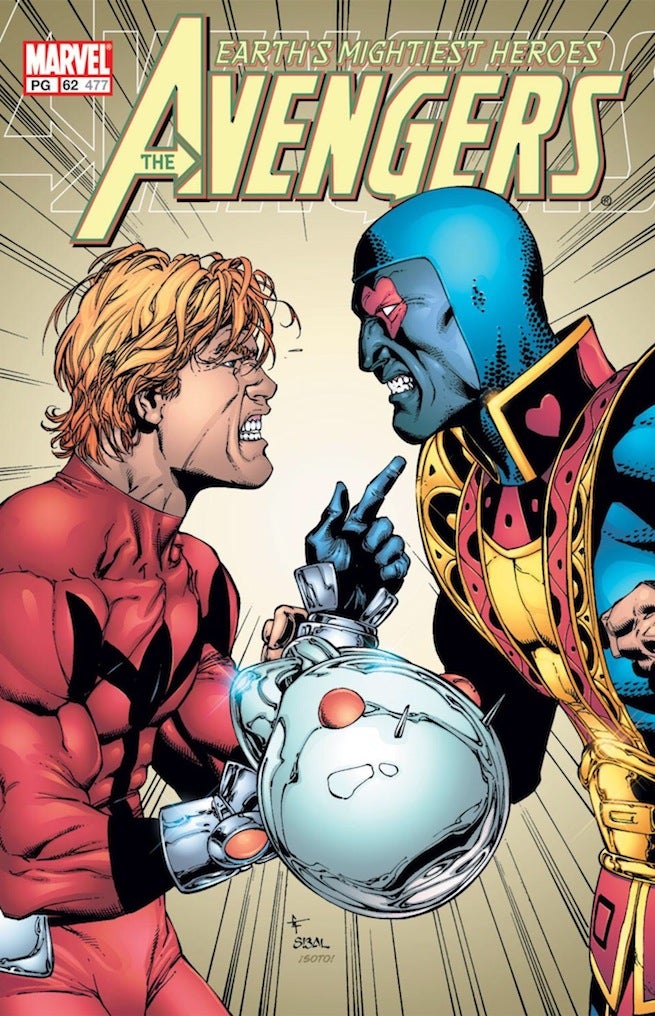 As part of the Geoff Johns/Gary Frank run on Avengers in the early 2000s, Lang, who has long been supporting the group and its members in an unofficial capacity, is formally invited to join Earth’s Mightiest Heroes.

The impetus behind Lang’s membership is his bitter child custody battle with his ex-wife who is remarrying. Lang’s ex claims because of his gallavanting with the Avengers, he doesn’t have the time or sense of paternal responsibility to care for their daughter, Cassie. When a judge agrees, Lang decides the best way to emotionally cope with this devastation is to throw himself into his superhero work 24/7.

The comic ends on an interesting note when Lang is confronted by fellow Avenger Jack of Hearts regarding his no muss/no fuss initiation into the group. In later issues, the two would have a somewhat complicated relationship, highlighted when Jack committed suicide by first grabbing a man who had abducted Cassie and flying into space before detonating, and then later appearing in a zombiefied form during "Avengers Disassembled" and killing Lang. 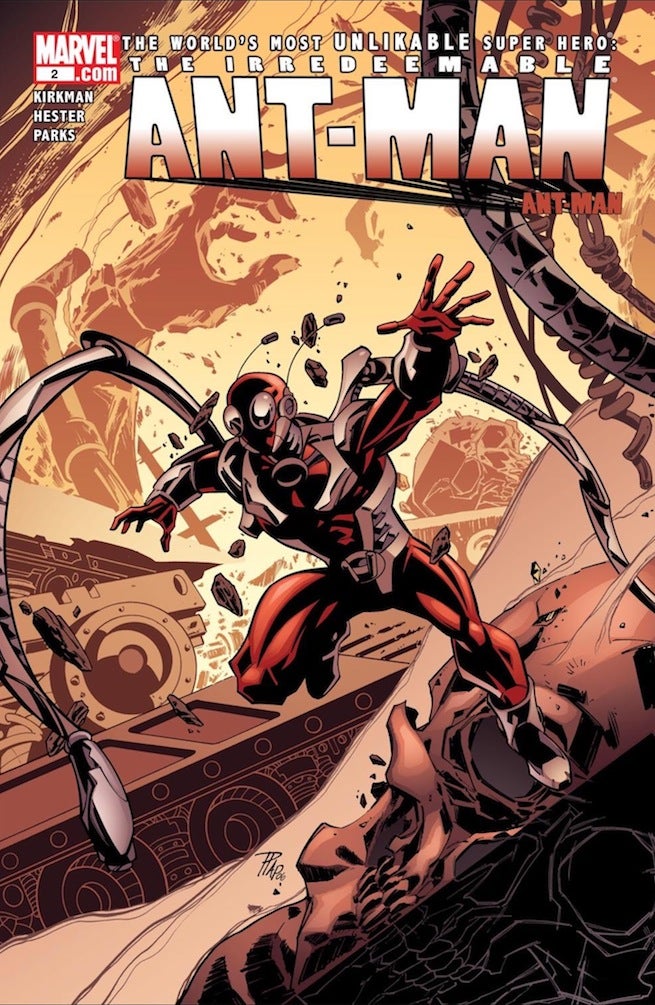 Readers who prefer their superheroes to be unlikeable jerks who lack all social graces should run out and get their hands on the short-lived 12-issue run of The Irredeemable Ant-Man by Robert Kirkman (of The Walking Dead fame) and Phil Hester. This series, which published between 2006-07, introduces a third Ant-Man, Eric O’Grady, a S.H.I.E.L.D. agent who stumbles upon a new Ant-Man costume being developed by Pym for S.H.I.E.L.D. use. O’Grady steals the costume from its prospective owner, and proceeds to use it to pick up girls and to do a little bit of crimefighting when the mood strikes.

The series has earned praised from readers and critics for its acerbic wit, though you really have to be forgiving of a protagonist who does such despicable things as tell his dead buddy’s girlfriend that his friend had been cheating on her (before shacking up with her himself and accidentally impregnating her).

Upon the conclusion of the series, O’Grady would be named an Avenger (he managed to convince Tony Stark that everything he did with Pym’s technology was on the up and up) and he also teamed with Pym as part of the three-part Ant-Man and the Wasp series. The character was seemingly killed during a 2012 issue of Secret Avengers, but was quickly replaced with a life model decoy. 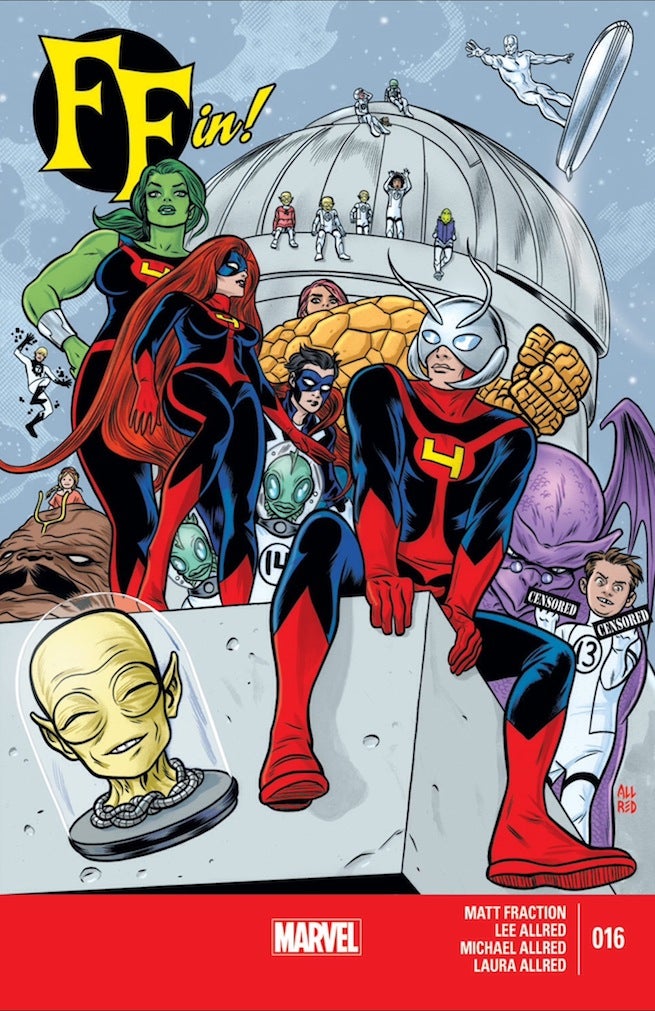 After getting resurrected as part of The Avengers: Children’s Crusade miniseries only to witness the death of his daughter Cassie at the hands of the diabolical Doctor Doom, Lang is convinced to come out of superhero retirement by Reed Richards to temporarily lead the young Future Foundation while the Fantastic Four go on a space vacation for what is supposed to be "four minutes." Of course, Reed and co. would be gone far longer than that, which put the spotlight on Lang and the substitute FF over the span of 16 underrated issues of this 2012-13 series from Matt Fraction and Mike Allred

The second volume of FF climaxes with a long-awaited confrontation between Lang and his daughter’s murderer, Doom. Lang goes into the fight promising to eviscerate Doom every way possible, and comes through on his guarantee via a startling discovery regarding how to harness the famed Pym Particles to augment strength and durability (in addition to their size changing qualities).