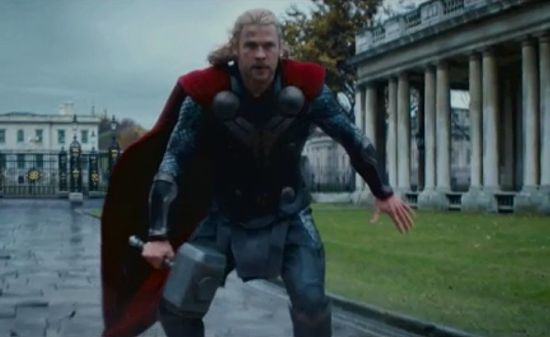 Jaimie Alexander, who plays Lady Sif in the Thor films, told an audience at Stan Lee's Comikaze today in Los Angeles that a third film in the franchise is coming.

That's coming from Forbes blogger Mark Hughes, who's attending the AMC panel at the convention. He'll have much more with Alexander later this weekend.

This is the second major tease Alexander has dropped at the panel, the first being the news that she's having conversations with Warner Bros. about a DC Entertainment property, assumed to be Batman vs. Superman.

According to sources who have seen the film, one of the movie's two post-credits sequences is a scene that sets up the potential for a third Thor film pretty explicitly. If another installment is confirmed anytime soon, then, the question might be whether Alan Taylor, who presumably directed that scene, will return for the third movie.

Recently, series star Chris Hemsworth revealed that his contract will see him with Marvel at least through two more Avengers films and one more Thor film, although at the time, he phrased the Thor film as something that might happen rather than something that will. The next two Marvel Studios films--Thor: The Dark World and Captain America: The Winter Soldier--are follow-ups to more modestly-successful films and, excepting Avengers: Age of Ultron, the next few films seem to be potentially smaller blockbusters than the Iron Man trilogy. Getting some traction with at least one of those franchises would certainly help dull the impact of losing Tony Stark's solo films for the time being.

A Third Thor Film Is On the Way, Says Jaimie Alexander