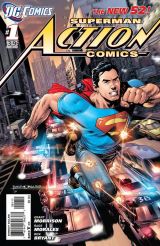 perhaps one of the top five most anticipated comics of the DC relaunch, hit stands this week, and amid all the costume changes, new looks and talks about him being a jerk or what have you, the matter of just how this new Superman measures up in the reframed DCU is a big one, and this version of Clark Kent's alter ego is quite the surprise. The book that launched the iconic hero so many years ago unleashes a new Superman for a new era. The Superman we come across in Actions Comics #1 is a bit of an anti-establishment vigilante, who doesn't mind making a show of his power for possibly corrupt and/or naive policemen, all in the hopes that justice will truly be blind for all, no matter age or social status. The issue feels like a pretty rollicking ride, full of surprises for long-time fans of Supes who may not be used to seeing him scare the life out of crooks with harsh tactics such as pretending to fall from a building with a suspect in tow, only to stop at the last minute. All this to force a confession out of the criminal. More intriguing bits happen in this effective issue, so be prepared!

Superman has no trouble stopping bullets, using his X-ray vision, or swinging a wrecking ball as a weapon, all in the search for justice for, as he says, "for rich and poor alike". It's a bit interesting that writer Grant Morrison has found a way to look at the character in a different light, as he has been redone and tweaked in so many ways recently, many of which seem just out of the sheer need for headlines and attention to the character. This Superman feels fresh and not gimmicky. Seeing him square off with the police in an attempt to get a creep to confess to a crime is interesting, and certainly paints a different picture of this iconic American figure. New readers may be a bit surprised to see the city of Metropolis in an all out war, trying to catch this man who they don't quite understand and seem to fear. Working with the hunt for Supes is none other than Lex Luthor, who retains some of the cool and calculating evil that we know of him, but with a more relaxed portrayal that seems interesting, if not a bit odd, at first.

Those wondering just what's going on with the alter ego side, Clark Kent, need not worry. In this new context, Clark and Lois are now rival reporters at rival newspapers, who both appear to the hunting to outscoop the other for any hot topic. A final demonstration of Superman's power saves Lois and young Jimmy Olsen, and also shows us some intense images of a train run wild and, possibly, Superman in peril on the last page of the issue. It appears that while Superman does a lot of good for the common man, as demonstrated by the fact that he is literally surrounded by them in one scene when the military is trying to trap him, he is not about breaking bones of thugs and lowlifes who make take advantage of others. It's a new world and a new Superman, and it works pretty well. There's plenty of interesting angles to this tale to keep it fresh for long-time fans, and different yet familiar enough for new readers. Grade: A