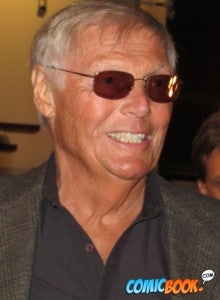 As words of advice to the latest actor to take on the mantle of Batman, Adam West tweeted, "Remember Ben, with the cape and cowl comes great responsibility (and lots of heat). Bring deodorant. #batman @BenAffleck."

Wise words indeed from a legendary Batman, as no one wants to smell a stinky Batman in the hot sweltering sun on set. Hopefully, Affleck will heed the advice and wear plenty of Bat-Deodorant.