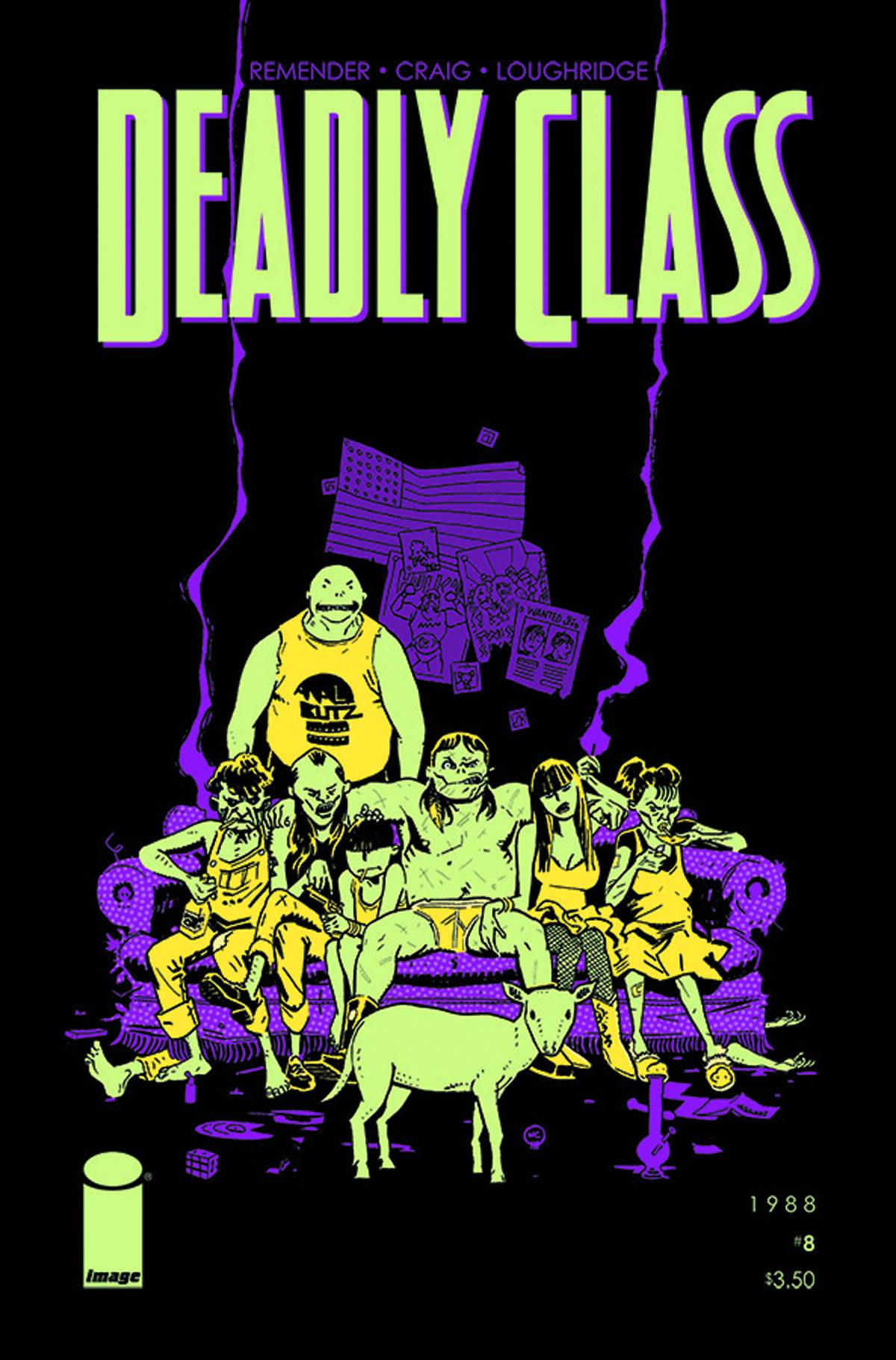 Deadly Class #10 is an issue containing two distinct stories that are reflections of one another.  They are both the same and opposite, a dramatic version of the chemical concept of chirality. The first half of the issue is understandable, relatable, and humorous. It is something that feels like it could have happened to you at the age of 16. The second half seizes upon that same dramatic structure and adds life or death stakes along with a complex heist scenario. Together these two halves create a whole that illuminates why Deadly Class is one of the best comics being published today.

The opening section of Deadly Class #10 details the consequences of Marcus’ decision to party with Saya in the previous issue. He awakens in a park hungover and half naked. Not only has he cheated on his emotionally fragile girlfriend Maria, but he’s an absolute mess and late for work. It’s an extreme scenario, but the mistakes he has made are basic and human. This is the quintessential teenage screw up.

Rick Remender and Wes Craig work through Marcus’ thought process in a completely organic manner. They blend images and words into a frantic stream that pour down each page. As the story leaps between Marcus’ actions in the present and his internal dialogue and thoughts, there’s a strained coherency. This is the reaction of a teenager who has made a massive mistake, not an outsider’s narration of what that might be like.

The text boxes lining the sides of the page and jumping across panels are composed of sentences, fragments, and sometimes only a single word. It’s a stream of consciousness reassembly of what happened the night before and just how bad the present situation is. Remender’s scattered prose not only feels authentic, but places you firmly in Marcus’ shoes creating a sense of empathy for a character who just hurt a lot of people. Craig’s panel compositions provide the same panic-stricken tone. He splices wide cinematic panels of Marcus scrambling across San Francisco with small square flashes of the night before. Marcus’ face is wide and pale, his eyes are stricken circles looking into oncoming traffic. Everything about his expression and body language details his attitude, while thoughts from the night before continue to confront him.

All of this energy is put into correcting the situation. As chaotic as it all seems, it’s moving towards the goal of reaching the comic store. This is all rising action, exceedingly well paced, leading to the simple task of getting to work. It’s also leading to the twist in the action and something that Remender and Craig haven’t done before in Deadly Class: gross-out humor.

Throughout the first half of the issue, Craig structures all of his panels using only horizontal and vertical lines, none of the slightly akilter formatting that he’s fond of utilizing. After Marcus arrives at the comic store it becomes an even more regular pattern of four wide panels per page. In the final page before the gag-inducing climax, he institutes a break in each panel creating a 1-2 rhythm between short and wide panels as Marcus talks to a customer. All of this makes the disgusting eruption of diarrhea on the following page exceedingly effective. Horizontal and vertical panel construction is lost and the 1-2 rhythm is reversed, then reversed again. What happens is almost as disorienting and disturbing for readers as it must be for Marcus. Craig’s bulbous and frothy sound effects make it all the worse. They fill the page and contain the look and feel of a bodily function gone terribly awry.

Lee Loughridge’s coloring is every bit as integral to this twisted climax. He establishes a normalized color scheme once Marcus arrives at the store. The sickly, pale yellows that coat these pages aren’t appetizing, but alongside Craig’s steady panel structures allow readers to become comfortable. When the action and panels suddenly change, so do Loughridge’s colors. He shifts to a bright lime green reminiscent found on the ugliest of cars, then darkens that color with tints of brown. It’s an ugly scheme that makes the sequence visceral and effective.

The literal shitstorm that erupts in the first half of Deadly Class #10 is only a precursor to the metaphorical version discovered in the second half of the issue. Mundane actions like rushing to work and getting sick are mirrored by the heightened reality of this narrative in the teens assault on Fuckface’s home.

Loughridge distinguishes the two halves of the issue through a significant change in his palette. The ugly yellows and greens, alongside the brighter colors of day are replaced with a significantly darker range of hues when the action shifts to their nighttime attack. It creates a subconscious separation within the issue, breaking apart the more relatable actions that occur in the light of day from the work of high school assassins at night.

The darkening shift in color marks a significant increase in the stakes and tension. Keeping your job is replaced by keeping your life. Explosive diarrhea is replaced by literal explosives. Human feces may be funny, but blood is a different matter altogether.

The rising action to the second climax in Deadly Class #10 is much less frantic, however. Craig plays upon the classic trope of overlaying the exposition of a heist with its actual enactment. It’s something we’ve all seen dozens of times in movies and comic books. That doesn’t make Craig’s execution any less impressive, however. He first transfers to a second timeline by linking Lex’s face during the planning to his actions during the assault. Moving from that point Saya’s word seamlessly accompanies the beginnings of this plan until the transition from past to present is complete.

It’s at that point that symmetry between the two halves of this issue becomes clear and things go very, very badly. As excellent as Craig’s visual exposition of complex planning may be, his action sequences are the highlight of Deadly Class #10 and the series as a whole. He fires panels onto the page like a machine gun, alternating between staccato bursts of reactions and long sprays of violence. In a house filled with killers, he keeps track of each person and their positions. The sense of confusion exists with the quick actions and reversals of power, but the pages never lack clarity. The few brief moments of action at the end of Deadly Class #10 reveal Craig to be a master of his form.

Unlike the awful climax that occurs in the comic store, it’s unnecessary and unfair to delve into the final pages of the second half of Deadly Class #10. Remender and Craig have been building to this confrontation since the first issue of the series and leave a perfect cliffhanger for readers. Deadly Class #10 is the mounting storm, tearing into both the daylight and darkness of Marcus’ life, building to this climax. Whatever comes next, only two things are certain: it will be messy and it will be must-read comics.

Fortnite Still Has "Many Years" of Marvel Content Planned

Power Rangers: Get To Know The Cast of Dino Fury (Exclusive)

Sony In Talks to Acquire Crunchyroll From AT&T

The Mandalorian Season 2 Premiere Has a Star Wars: Episode I Easter Egg