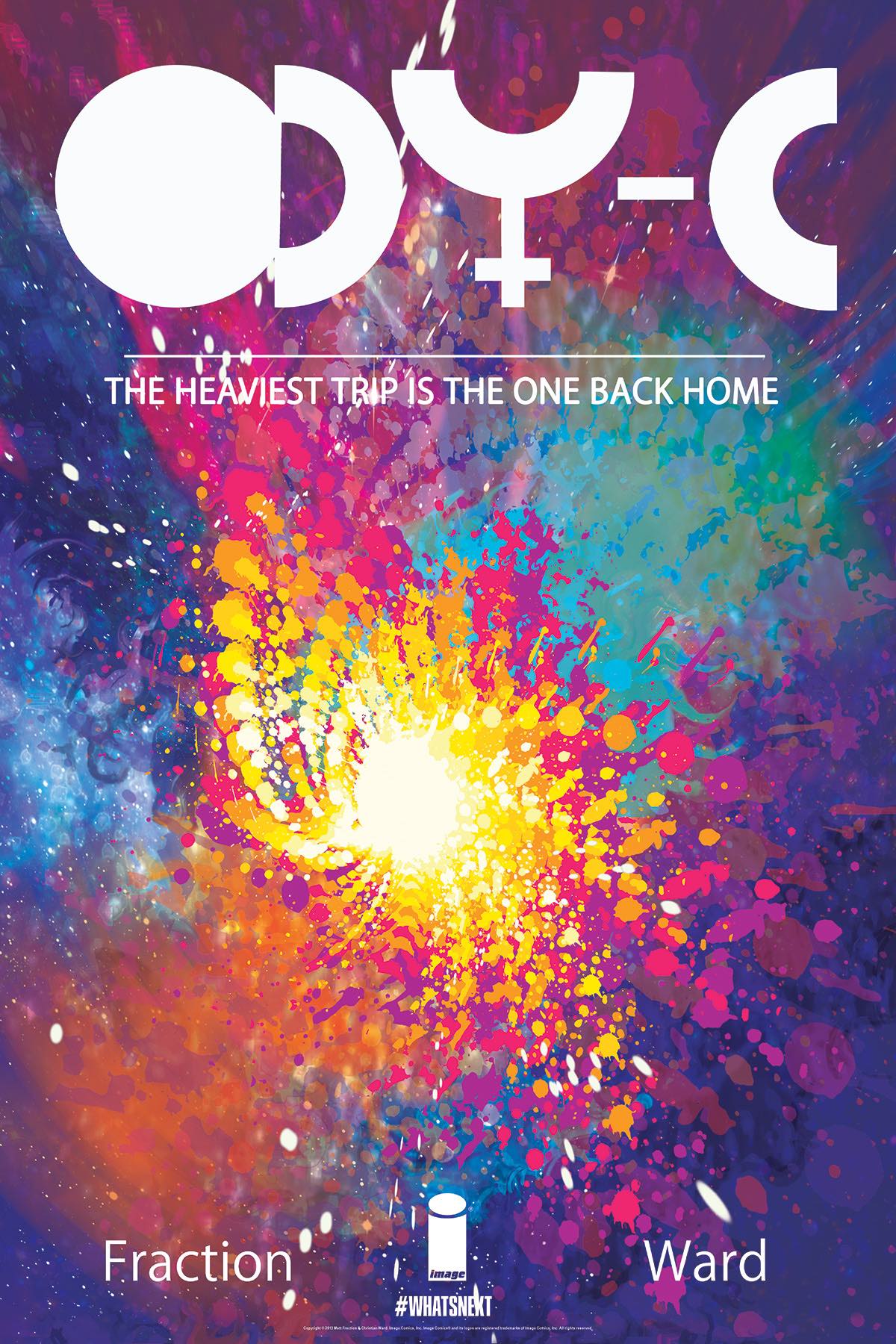 Adapting a classic piece of literature is a momentous task. The very act of adaptation demands comparison and there is an inherent level of hubris required to address a true classic and try to improve upon it. There are few better examples of a classic than Homer's Odyssey. It is the second oldest story in the Western canon and the basis for transcendent adaptations like the Coen Brother's O Brother, Where Art Thou? It has previously been adapted into the comics form multiple times by creators like Gareth Hinds, Roy Thomas, Greg Tocchini, and Seymour Chwast, as well as a reinvention by Gerry Duggan and Phil Noto in The Infinite Horizon. Matt Fraction and Christian Ward, two of the most talented creators working in the industry have decided to adapt it once again and bring their own unique sensibilities in Ody-C.

They have reconstructed Homer's tale of Odysseus' ship-bound travels from conquered Troy to his home in Ithaca to a star-spanning future where Troy and Ithaca are planets and Odysseus pilots a spaceship. The gendered aspects of the tale have been swapped as well. Odysseus is now Odyssia, existing in a future where women lead society and compose the great military heroes of space. Odyssia is tired after ten years of war upon the planet Troiia and wishes to return home to her family in Ithicaa. Yet this science fiction landscape is populated by gods, albeit ones with new genders, just like those in Homer's tale and Poseidon does not plan to allow Odyssia an easy voyage.

Fraction and Ward are interested in changing far more than the setting and genders of this tale though. In adapting the epic poem to comics, they are prepared to exploit the shift in medium. The manner in which Ody-C reconstructs Odyssey is apparent from the very first pages of this story which unfold to reveal a massive eight page gatefold. It is a beautiful image that sets the stage for the story to come. It encompasses all that has come before, while constructing a clear sense of style and tone. The pages shift from the skeletons left by way to the fantastic starscapes above to the fierce warriors of Achaea before finally returning to the ever present spectre of death. It is a magnificent visual representation that makes the scope of the past and future something that can be truly felt. Ward's massive opening page establishes that this story is an epic in the truest sense of the word.

Only the last section of this panorama reveals any text. The text is revealing though. It is numerically noted, with the very first caption beginning with one. He continues to break down the rest of his captions accordingly, providing a new method of segmenting and measuring the comic. Fraction's prose contains a poetic sense of meter. He starts the story by recapping what came before, "Troiia, impregnable, fell. Then Achaea triumphantly rent it asunder." The writing in Ody-C is not a complete modernization of classical aspects. Although modern curse words and descriptions are applied, there is still an austere sensibility to some lines. Fraction and Ward are interested in translating the style and feel of an epic poem to the comics medium.

Whereas Fraction is taking stylistic cues from Homer and updating some of the language, Ward is tasked with reinterpreting a prose narrative into a visual form. If it was not evident from the transitions in setting and gender, Ody-C is not composed as a teaching tool or modernization of the original epic. It is an adaptation that seeks to define itself as a unique work and can be every bit as challenging as the source material.

The page compositions in Ody-C #1 are complex. While always readable, Ward's work challenges readers to often interpret the page as a whole and engage with his artwork in a comprehensive manner. The second page of the issue is centered around concentric circles displaying a single drop of blood being sacrificed into a small sun. The act of sacrifice is made to be the focal point, while the rectangular panels that surround it serve to explain the action and create balance. Even the lettering aides in this sense of equilibrium.

Many pages transfer the focus of storytelling from prose to art in this sort of manner. Reading only Fraction's script would render the story as nonsense. The captions and speech bubbles are designed to enhance and interpret Ward's images. He draws events and characters in a style that borders upon being a fever dream. Subjects and actions are always presented to be clear and understandable, yet there is an exaggeration to forms and backgrounds that renders the story to be outside of reality. It is a construct of imagination and, at its best, is simultaneously lucid and dreamy.

Ward's color work helps to highlight this balance. The cover displays a dazzling array of swirling hues and this diverse palette is applied throughout the issue. The skies over a battlefield move as a muddied red and the floor beneath the gods' feet shines like starlight covered in cirrus clouds. The coloring is used to enhance the emotion and feel of each panel, providing it with a truth that is not found in realism.

This work would be viscerally effective no matter the accompanying text, yet Fraction's manner of inclusion works to enhance it. With only a singular exception, all text including dialogue is presented in captions that accompany the text. Spoken words are found in color-coded boxes that help coordinate them with the speaker. The images are presented as being glimpses into the story that the words are crafted to accompany. The poem being told is found in Ward's art and Fraction is assisting it with footnotes.

Considered purely as an adaptation of the original work, Ody-C #1 is an imaginative, exhilarating start. Moving through these pages and discovering Fraction and Ward's reimagining with knowledge of the original text makes for a fulfilling experience. Yet much of this reinterpretation relies on that foreknowledge. The lack of exposition and presentation of the last page as a twist seems to assume readers are aware of how Homer's Odyssey functions. It is difficult to imagine a reader without this understanding being able to engage with the story in the way they might with an adaptation like O Brother Where Art Thou? or Infinite Horizon. Ody-C #1 succeeds as a companion to Odyssey, but the presentation of its story becomes flawed when that context is removed.

Ody-C #1 is a visually stunning and exciting adaptation of one of the oldest classics in Western canon. It seeks to reinterpret the source material not just through changes in place and character, but by focusing on the comics medium.