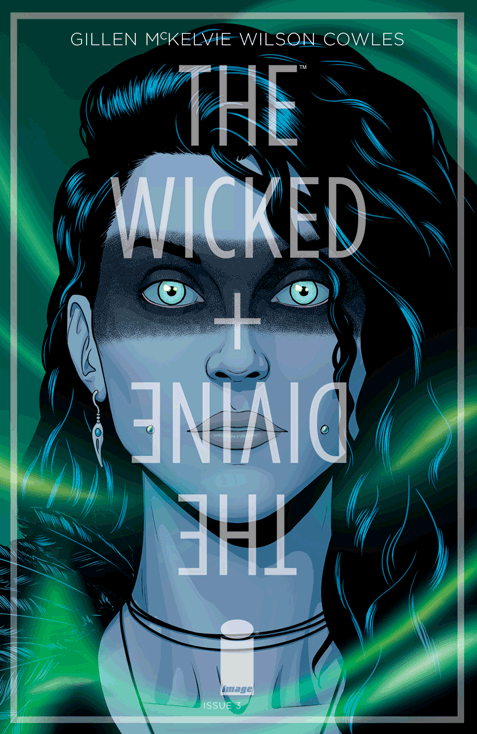 This is the third time I've written about the series in as many months. Kieron Gillen and Jamie McKelvie were already a great team when they launched their first creator-owned work "Phonogram." Everything that works in that comic has been grown and made better in their subsequent works like "Young Avengers" and the second volume of Phonogram, "The Singles Club". Although each of these series exists in its own universe, they are thematically connected in such a way that it's difficult to avoid making comparisons.

Exploring music, pop culture, fame, youth, and change, Gillen and McKelvie are creating comics that capture what it means to be young and alive after the turn of the century. And The Wicked + The Divine is their best work yet, presenting a world where gods live as pop stars.

The gods presented so far in "The Wicked + The Divine" so far are plenty odd. Lucifer's channeling of David Bowie's "Thin White Duke" and Sakhmet's cat-like antics stretch the definition of eccentric. Baphomet and The Morrigan create a new level of strange though.

As performers they integrate theater into their music. The experience of seeing them is every bit as fascinating as the music of Amaterasu was made out to be in issue one. Their behavior is melodramatic and bombastic. This type of play could be made out to be alienating or silly, but Gillen has created a sense of self-awareness about the gods. Both Baphomet and The Morrigan are conscious of their audience, whether they are fans or police, and play to them accordingly.

McKelvie simulates the same theatrical experience for readers. Starting where the last issue left off (with a severed head), the big moments are made to feel suitably large. Explosions, ghosts, and crows all burst off the page and toe a line between realism and absurdity that will make readers, as well as some characters, question what is actually going on. When Baphomet summons ghosts from the subway, they are made to look two dimensional with extraneous lines that provide the effect of being projected.

Each issue of "The Wicked + The Divine" thus far has featured at least one page-warping composition from McKelvie and the trend continues here. At one point darkness moves to consume all light and the way in which McKelvie portrays this is inspired. He forces the eye downward and into a two-page spread. It evokes a feeling of claustrophobia and complete immersion that match the music of Baphomet and The Morrigan.

Matt Wilson's colors are every bit as important. The effects of the encompassing darkness and Baphomet's ghostly companions are borne by the coloring that make them pop as something active and alive. His palette for the explosive side effects of snapping fingers re-emerges here and creates a connection to the most shocking moments of the first issue. A bright Warhol-inspired palette suggests an additional connection to pop art and showmanship.

All of this helps to create a commentary on the goth movement. Goth music can be parodied as silly or overly dramatic. South Park has created an entire set of characters out of that idea. Gillen and McKelvie take the music seriously though. They respect that it inspires a passionate fan base for which the music and the theater can be life changing. It's an experience that boosts the drama of everyday life and turns even the bleakest outlooks into something potentially enjoyable.

In "The Wicked + The Divine" #3, goth music is transformed into a visual experience and it is thrilling. Gillen, McKelvie, and Wilson understand what makes music and pop culture function on a primal level. In translating that to comics, they provide readers a new point of view and one of the best new comics of 2014.