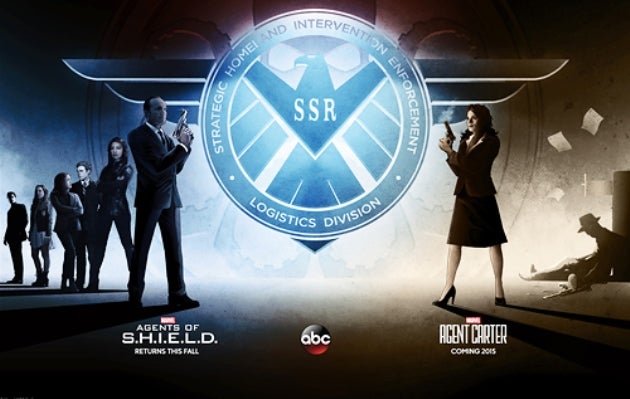 Continuing our look into the world of Agent Carter, today ComicBook.com covers what every die-hard comic fans look for in their Super Hero shows, Easter eggs. Like Agents of S.H.I.E.L.D., Agent Carter is full of little head nods to the greater world around the show. But just how deep does it all run?

The two executive producers for the ABC series, Tara Butters & Michele Fazekas sat down with us to point out some existing Easter eggs, and where we might see some more. Want to know what the deal is with Leviathan, or what Howard Stark is keeping from Peggy? Find out here!

Agent Carter has had a number of subtle hat tips and nods to greater Marvel comics continuity. There was one, that I don't think a ton of people picked on, like the mention of Goodman, Kurtzberg and Holliway as a law firm that's existing in that time.

Are those fun little things that, as you're peering over some old comics, you fit in to see if anyone notices? Are there more that people have not yet picked up on?

Michele: Roxxon Chemical is the evil chemical company from the Marvel Universe. It was based on Exxon, I believe. The character Leet Brannis comes from a comic book too. We have two jobs in that regard which is I want to reward the people who are familiar with the world, but I don't want to make it feel impenetrable. We want to make it if you have never watched Captain America, if you have never read a single comic book that you can still sit down and enjoy the show.

How about Leviathan? When comic fans first heard the name Leviathan, they almost expected these giant, monstrous creatures. Are we heading that way or are you guys taking the liberties to build Leviathan as a creepy evil organization to be the "big bad?"

Michele: In the very next episode we're going to find out in part what Leviathan is.

One of the other mentions some fans have caught during the show was in the episode where one of Stark's toys is called The Constrictor. Is that in any way a nod to the Serpent Society?

Michele: I don't think so. It's been always a challenge to come up with the fun gadgets. That one was a complete joke.

In creating the gadgets for the show, how careful are you guys to make sure it still feels spy-ish but not outrageously out of place?

Michele: It is a challenge. What I like about it it's a real collaboration between the writers and the props department and Marvel. The nice thing is we have Howard Stark. You have that opening to create things that are fantastic for the time period, but still feel like- There's a weird dichotomy because the gadgets are both retro and futuristic at the same time.

We try and make them feel like something that would actually exist in the future. For instance the Blitzkrieg button. When Howard was explaining the fake version of what the Blitzkrieg button was, "Oh It's a button that if you press it it knocks out all the power." Well that's an EM pulse. So he was describing an electro magnetic pulse. That's something that exist now. It's not a complete jump that he was the first person who invented it. Even though that was a lie. The lie still felt like that's a real thing that I believe somebody like Howard Stark who's so future thinking could invent.

It is fun, in the design phase of it, to make it look both... it's never going to look like a sci fi movie. There should be, even though the function is fantastic and futuristic, the design of it still feels of that time period. That's how we try and create those.

I always get the feeling that Howard Stark is always essentially telling about 85% to 90% of the truth.

Tara: And that may be actually giving him to much credit.

Is he already thinking about S.H.I.E.L.D. at this point?

Michele: It's interesting. I think maybe not at this specific point, but certainly by the end of the run of the first eight episodes I bet you he is. Because of how his dealings with the SSR developed. I do think you can see the seeds of that forming.

Now that we're about half way through is the pace of the show going to change at all? Are we ramping up to something major?

Michele: Oh Yeah. Look at the way so far it's progressed. By the end of episode three they've got all the gadgets, so think about that. In four you saw obviously it was a little bit of fun and hi-jinks between her and Howard and hiding Howard but then it all turned very dramatic when she realizes that he's been lying to her this entire time. Basically says she's done with him.

I think it's really fun what happens in five, six, seven and eight where every episode is very different.

Michele: And big cards are turned in each episode.

Tara: That's the nice thing about having only eight episodes is that you can't really tread water for very long. You have to keep going. We're sort of on the ride now until the end.

Is it easier for you guys to package a story in eight episodes than say if it were to have a full season?

Michele: Yeah. When you're doing heavily serialized show, and people really want big things to happen every episode it's very easy to wither stall out, because you're trying to let things- you need certain things to happen at certain parts in the season; or feel like you're moving so fast that at a certain point the audience goes, "Hey wait a minute. Not all this stuff can happen."

Trying to find that balance in an eight, ten, or thirteen episode order, I feel like you can be heavily serialized.

Tara: We're running Resurrection at the same time as we we're running Agent Carter. Resurrection's first season had eight episodes as well. The similarity there is that was also a very serialized show. It really allows you to craft the season in a very specific way. We looked at it as eight parts of a movie.

There's a part of the movie where all seems lost and everything goes to shit. Then you have your big act three.

Michele: Well it's like the first three episodes are your first act. Then four, five, six and even seven you could say are your act two, eight feels like your act three. If you're looking at that structure of a movie.

Tara: Structurally you can plot it out in a way that I think is harder. When you're doing twenty two episodes, you can do it but you have to break it up into little mini seasons. And it's tough. We've done it. It's easier to do on more episodic shows, or shows that- we we're on Law and Order SVU for five years.

That procedural, one case in each episode, not a lot of continuing story lines. It's a lot easier to crank out more episode. Because you don't have to know what happens in episode five to work on episode ten, because you know that they're not really going to talk to each other as much.

Where as this one, you have to break the second episode and know what's happening there before you move onto the third episode. It's a much more linear story breaking process. You need more time to do that. Eight episodes is a nice number.

Stay tuned as part three of our chat with Tara and Michele goes into how they build the world around Agent Carter. And if you missed yesterday's chat, you can read it right here.

Are you excited for tonight's episode? Let us know below.