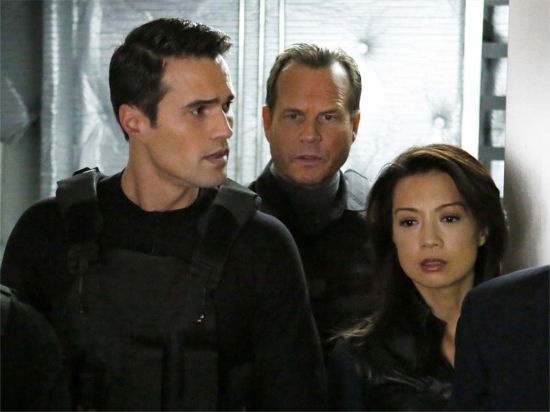 Warning: Spoilers ahead for the most recent episode of Marvel's Agents of S.H.I.E.L.D., titled "The End of the Beginning."

With Marvel's Agents of S.H.I.E.L.D. earning its spy genre wings a little bit this week, we have to wonder whether the picture we've been given up to this point is inaccurate, or at least incomplete -- and whether it may be another series regular besides Melinda May who is actually working with the enemy. With Victoria Hand revealed as working against Coulson and his team, and photos from "Providence" that seem to show John Garrett working closely with Raina and Ian Quinn, the battle lines for this brave, new, post-Captain America: The Winter Soldier world seem to be drawn. Most definitively on the "other side" at the moment is Melinda May, who was cooperating with outside forces, reporting on Coulson's activities and the progress of his dual investigations into the secrets of his resurrection and Skye's origins. But...I don't buy it. First of all, even if Joss isn't technically the showrunner, his name is all over the project and what's a Whedon family project if it doesn't have a kick-ass female lead? neither Simmons nor Skye is in a position to step up to the plate and replace Hand as the team's "tank" at the moment, so from a practical point of view, that makes me think that May's objections -- "I have no idea what's going on here" and "you have to believe me" -- are true. It's my suspicion that May has been reporting back to the same person who was most aggressively trying to keep that information private: Nick Fury. He's not likely to be played as the bad guy in the show, though, and as we all know going into today's Captain America: The Winter Soldier, there are a elements within S.H.I.E.L.D. that we can't be so confident about. Garrett is a big question mark; while it seems too easy to take those "Providence" photos at face value in much the same way it seems too easy to believe May is working with one of the bad guys, it's a conversation he had with Skye that made us doubt not just Garrett, but Agent Ward as well, during "The End of the Beginning." 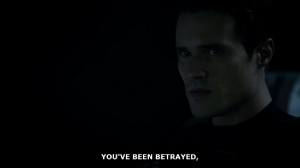 "Turn, Turn, Turn," Garrett told Skye, dropping the title of the episode in which Coulson's team will reportedly deal with being trapped on a plane with a traitor. [Pictured at right: A potentially eerie bit of foreshadowing thanks to closed captioning.] Well, who's on the plane? It's Garrett, Ward, May, Coulson, Fitz, Triplett and Skye. Garrett may or may not be a traitor. May is, in my opinion, out. Coulson could have been somehow "programmed"  to be literally his own worst enemy and not be cognizant of it during his death and resurrection, but if that's the case, it would make the rest of the team seem very inept that they never figured it out while doing all that extensive looking into Coulson's past. Ditto Skye, who also has plot protection because she's tied to the mystery of the blue alien and because her own mystery still hasn't been fully resolved...and because we've already had the "she's a traitor!" story come and go and it would seem unproductive to revisit it so soon. That leaves Fitz, Triplett and Ward. Honestly, Triplett hasn't got enough screen time or character development yet for his defection to have any emotional weight. If Garrett turns out to be a traitor, I could see Triplett going that way as well...but I could also see the writers getting a lot more interesting material out of his dealing with his father figure/boss working with the bad  guys. Fitz, I believe, is safe. If he were betraying the group, it would make little sense for him to be the one to call attention to the fact that he was creating a private line to dial out of The Bus. "He's different than I remember him," Garrett told Skye of Ward. This is played down, but coming right on the heels of the "Turn, Turn, Turn" title drop, it felt like a red flag. If Garrett is bad, and Ward was meant to infiltrate Coulson's team, this declaration on the part of his once-and-future S.O. could actually be an indicator that Ward has defected to Coulson's side. It would, however, leave some real questions. Was Ward answering directly to Hand when he killed the Clairvoyant's decoy? To Garrett, his former S.O. and somebody who could exercise some pull on him? Or just The Clairvoyant himself? "We're here to take him in, not out," Ward cautioned Triplett earlier in the episode. And while he was certainly being emotionally manipulated with the Skye remarks, he didn't seem particularly disturbed when he pulled the trigger. That he was just an episode or two ago struggling with his feelings for friend-with-benefits May, the sudden return to Ward and Skye as the show's Designated Couple -- and one with a connection powerful enough to drive a seasoned agent to kill -- feels odd. In the trailer for "Turn, Turn, Turn," we see only a single shot of Ward that I can make out -- and he's protecting Skye again. That might track with the whole "I'm secretly in love with you" thing, but it could just as easily be that she's necessary for the next stage in Centipede's plans. When he tells Skye that he doesn't regret disciplinary action or worse "when it means you're safe," it was moments after the Clairvoyant, speaking through the computers, told Coulson that Skye has something that [The Clairvoyant] wants. 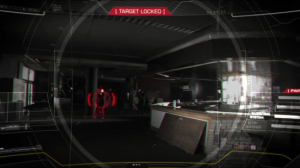 Deathlok's targeting mechanism, meanwhile, locked in on Ward (who was leading the assault on the fake Clairvoyant's headquarters), then fired off a blast that damaged the building and injured the two people trailing behind Ward while he escaped unscathed. Not for nothing, but what's the point in having a targeting system that can designate a target as "locked," if a normal human moving at normal human speed can easily sidestep the targeting system? This is, admittedly, all a little thin. The show, having finally decided to embrace the "spy" part of their super-spy organization, is actively working to obfuscate just who the good guys and the bad guys are between now and the finale. But few people seem to have given any serious consideration to Ward as a potential long-term threat, while to me, the moment a seemingly-calm good guy shoots and kills a "bad guy" in a situation where he doesn't need to, it raises a red flag. Bits of loaded dialogue and the like push me another few feet in that direction.