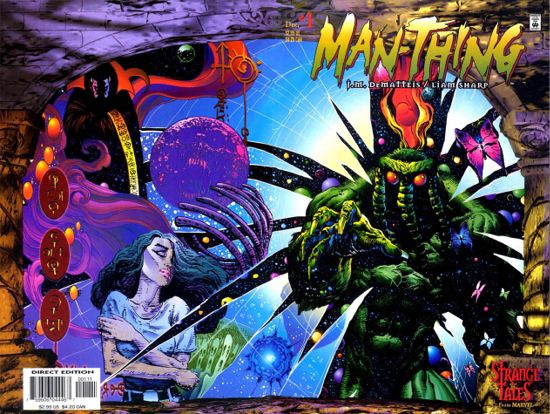 In the "Providence" episode of Agents Of S.H.I.E.L.D., Agent Ward and Agent Garrett broke into the Fridge and freed the inmates. In one scene, they blasted a hole in the bottom floor of the Fridge, and they seemed surprised by whatever they were looking at off camera. At the end of the episode, Garrett revealed a container with gravitonium inside, so it was widely assumed that is what they found underneath the Fridge. However, a sneak preview for this week's episode of Agents of S.H.I.E.L.D. reveals something else that was in the Fridge. In the preview, Agent Hill is on the phone complaining to someone. Agent Hill says, "Yeah, it went as expected. S.H.I.E.L.D. implodes, and everyone wants answers. The C.I.A, N.S.A, and N.R.L., them I can handle, but Congress...Congress is like kindergarten. Where is this Fridge? What was in there? Who or what is a Man-Thing? I swear I need a cocktail and a lobotomy." Could it be that Agent Garrett and Agent Ward freed Man-Thing from the Fridge? While it might seem likely that Agent Hill is just making a throwaway Easter Egg reference, it's not the first time that Man-Thing has been hinted at in the Marvel Cinematic & TV Universe. Ellen Brandt was a character in Iron Man 3, and she was once married to Ted Sallis, who became the Man-Thing. With a reference to Stephen Strange in Captain America: The Winter Solider, could Marvel be setting up a Nexus of All Realities storyline for a Doctor Strange movie? Agents of S.H.I.E.L.D. airs on Tuesday nights at 8 PM ET on ABC.

Agents Of S.H.I.E.L.D.: Man-Thing Was In The Fridge