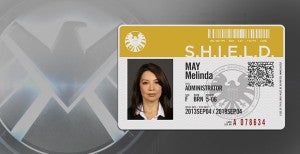 When Marven's Agents of S.H.I.E.L.D. debuts in less than two weeks, much of the series will take place on "The Bus," the S.H.I.E.L.D. jet that's been specially-customized for Agent Phil Coulson, his pilot Melinda May and their team to live, travel and operate out of. May, played by E.R. actress Ming-Na Wen, recently spoke to USA Today in an interview released earlier this afternoon, in which she gave the paper the rundown of the plane's features. "May knows all the ins and outs of the Bus. I don't think she's out there detailing it, but she definitely makes sure that everything is taken care of and in working order. This is our headquarters," Wen told USA Today. "Any time we have any sort of investigation we have to deal with or if we're locating our S.H.I.E.L.D. agents, it's all here. If there is an emergency where a satellite is blown out, we have our own capabilities to communicate with the people in the chain of command. It's almost like Air Force One in that sense." She also said that the sets--in particular Agent Coulson's command center and office--would reveal a lot about the characters, and that it would be filled with mementos, trophies and other indications of the nature of S.H.I.E.L.D. in the Marvel Cinematic Universe. According to the article, here's some detail. There's more at the link above:

Another small area features in-flight reading material, including 16 volumes of The History of S.H.I.E.L.D. and a manual that requires top-secret clearance. Wen has a favorite: A Concise History of Super-, Hyper- and Ultra-Human Abilities. "I love that one." Near the command center, a circular staircase leads up to Agent Coulson's office, a sky-lighted aerie and virtual museum. It contains a mix of new and old, including a model of the plane, a S.H.I.E.L.D. badge and needle gun, a wireless radio, a telescope, binoculars, pilot goggles and a compass.

Agents of S.H.I.E.L.D.'s Ming-Na Wen Tours "The Bus" Ahead of Season Premiere