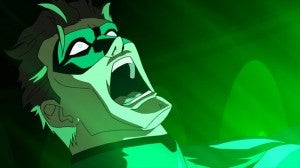 DC Comics has been on a heck of a run with its animated movies the past few years, so they've decided to stick with what works. Dipping back into the well, DC called on Alan Burnett to write 'Green Lantern: First Flight.' Burnett, who has been involved with a multitude of DC projects, including 'Batman and Superman' and 'Batman: Mystery of the Batwoman', pitched his version of a Green Lantern DVD in one line:

"Have you ever done Green Lantern as Training Day?" with the idea of the Denzel Washington role being Sinestro. They said, "That sounds pretty good - start writing." And that's how it began.

Now that's about the fastest route to an assignment we've ever heard. To check out more of Burnett's comments on the film, head on over to SciFiScoop.