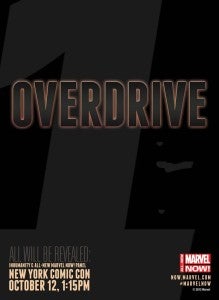 Tradd Moore and Felipe Smith will come together this spring for a new Ghost Rider series for Marvel Comics--and while the traditional Johnny Blaze Ghost Rider may be appearing in Thunderbolts soon, this version is an entirely new character--with an entirely new ride (or rides). "Tradd, Felipe and I all have similar taste in cars so you're going to see a lot of 60s and 70s muscle cars, very angular stuff like GTOs and early Chargers," series editor Mark Paniccia told Newsarama. "I'd love for there to be some Corvette love but there's going to be a lot of rough driving and I couldn't bare to see a 'Vette get damaged, even if it's make believe (yeah, I had nightmares after that first Star Trek film. You know what I'm talking about). There's going to be more modern cars too. Stuff the kids like these days." The new character, named Roberto (Robbie) Reyes, is "a young guy, a mechanic who lives in a bad neighborhood and just wants out," Paniccia said. "He'd get up and go if it weren't for his little brother, Gabriel who is disabled. He loves his brother more than anything and is will to do just about anything to find a better place for them."