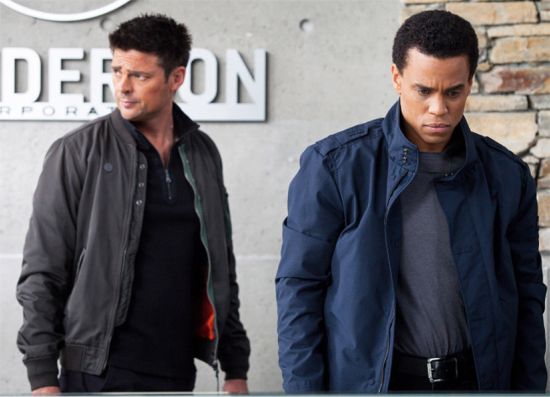 FOX has released six preview clips for tonight’s episode of Almost Human, which is called “Are You Receiving?”

The first two clips are just compilations of various scenes, along with rave reviews from critics. In the third clip, Detective Kennex and Dorian argue about everything from punctuality to appropriate coffee temperatures. In the fourth clip, Dorian accesses the archive footage to find clues about a hostage situation. In the fifth clip, Detective Kennex disregards the demands made by Captain Maldonado regarding the hostage situation. In the sixth clip, when emergency call signals get scrambled Dorian begins answering the calls in hopes of gaining information.

In the “Are You Receiving?” episode of Almost Human, Detective Kennex and Dorian battle an intense and futuristic hostage situation, while Captain Maldonado (Lili Taylor) attempts to meet the terrorist’s demands, hoping to protect innocent people.

The “Are You Receiving?” episode of Almost Human airs on Monday, November 25 from 8 PM to 9 PM ET/PT on FOX.