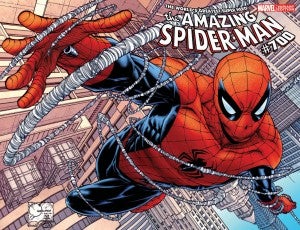 Marvel Chief Creative Officer Joe Quesada will provide a variant cover for the final issue of The Amazing Spider-Man, due in comic book stores the day after Christmas this year.

The status quo will be upset in the final months of The Amazing Spider-Man, leading to a new, different man behind the mask in Marvel NOW!'s upcoming The Superior Spider-Man. Accordingly, this may be the final cover featuring Peter Parker as Spider-Man for a while.

Check out the formal announcement below.

Marvel is pleased to present your first look at Marvel Chief Creative Officer Joe Quesada’s jaw-dropping variant cover to Amazing Spider-Man #700, the FINAL issue of the series! Before the year closes out, fans are in for one of the biggest shocks to hit the life of Peter Parker. Just when you thought all was going well for the World’s Greatest Super Hero, think again. This December, secrets are revealed, but the twists and turns are not done yet!  Join Dan Slott, Humberto Ramos, and a cavalcade of talented writers and artists in witnessing Amazing Spider-Man come to a close as we celebrate 50 years of Spider-Man!

So what are you waiting for? Head on over to your local comic shop and reserve these today!