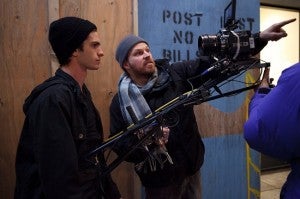 In a wide-ranging interview, Sony Columbia chief Doug Belgrad told The Hollywood Reporter yesterday that Marc Webb, who directed the studio's midsummer hit The Amazing Spider-Man, may not be able to return to direct the movie's sequels due to contractual obligations the filmmaker has to 20th Century Fox.

"We'd really like him back, but there are obstacles," Belgrad said of the director, whose debut feature, (500) Days of Summer, was distributed by Fox and who owes the studio a picture now.

The degree to which they'd "really like him back" is probably questionable, too, given that in the same interview, Belgrad acknowledged problems with The Amazing Spider-Man, the kind of thing studio heads rarely do with a film that's both still in theaters and performing reasonably well.

Asked whether he saw any problem areas in the film, he answered,"Yes. The section where Rhys Ifans' character turns irrevocably into the Lizard. It took several months to figure out, and the filmmakers cut a bunch of scenes. In software parlance, it required a patch."

The cut scenes have been the cause for much speculation, with many critics (including ComicBook.com) suggesting that it may also relate to an overall change to the format of the movie to make it less self-contained and more sequel-friendly.

In the course of the interview, Belgrad also told THR that the studio was looking for a way to revitalize and reboot their dormant Jumanji property, in much the same way they have with Total Recall, which will be released shortly. He also said that a sequel to this spring's surprise hit 21 Jump Street is set to go before the cameras soon, and that another Men in Black is planned but that it's unclear when or what form it will take.

"We believe [Men in Black] is an ongoing franchise," Belgrad said. "We're going to do [another one], but we don't have clarity yet on how it should be done."