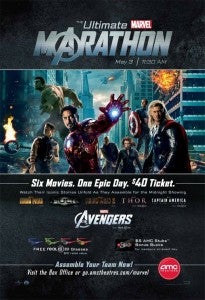 Did you miss out on seeing one of the previous Marvel Studios movies that have been building to this summer's release of The Avengers in theaters? Well, the day before The Avengers hits, AMC Theatres is running an all-day marathon in a handful of cities that will screen five of them to allow fans to get caught up.

Beginning at 11:30 a.m., the chain will run Iron Man, The Incredible Hulk, Iron Man 2, Thor, Captain America: The First Avenger, in the order of their original theatrical release and in 3-D where applicable (Iron Man 2 and later). The marathon will then culminate with a 3-D, midnight screening of The Avengers. Tickets are $40.

So far, AMC is only offering tickets for ten cities including New York, Boston and (of course) Downtown Disney. The chain's website indicates that more cities will be added, and tickets made available, on this Friday, March 16.

Agents of SHIELD EP Reveals One Major Regret From the Series