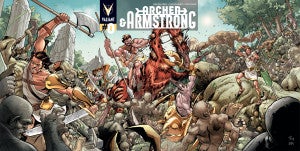 The Epic of Gilgamesh gets a Valiant spin in last week's Archer & Armstrong #0, in which the hero of legend is replaced by the Anni-Padda brothers in a retelling of the tale that pits them against techno-organic man-scorpions, dinosaurs and more to recover the Boon, the ancient technology that granted them their immortality. Series writer Fred Van Lente joined ComicBook.com to talk about the issue. Remember that these "commentary track"-style interviews are meant for those who have already read the book, so there are spoilers ahead. If you haven't yet, why not go buy a copy and read along with us? ComicBook.com: This is quite a jumping-on point. Did you guys make a concerted effort across the line to make sure the stories you were doing were done in time for #0 or did that just work out for archer & armstrong? Fred Van Lente: It was definitely just a coincidence in my case, where the opening in #1 had Ivar already in possession of The Boon, and Gilad was already dead, and there were these oblique references to a place called the Faraway, so there was a definite story-before-the-story there. I always wanted to tell that story, we just didn't know when until fall of last year, when Valiant started cooking up the #0 initiative. 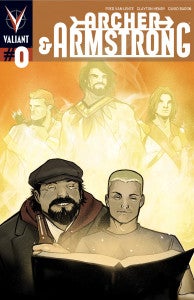 ComicBook.com: It's also the first time in a while we've had a chance to see the two kind of being normal together. Has there been a time since they came together that they had time to sit and read? It seems like the book has been nonstop. Van Lente: Yeah, that's just reflecting my personal taste. I find "normal" to be "boring" in genre stories. It also tends to violates the old writing maxim that nothing that doesn't drive the story is superfluous. That said, I am really happy with the way that exchange between Archer and Armstrong worked out. ComicBook.com: The concept of this issue is great. How did you decide that you wanted to reinterpret a classic for the zero issue? And why did you choose Gilgamesh? Van Lente: Thanks. That was a decision I made when developing my original pitch. The concept of "The Boon" comes from the works of Joseph Campbell, which I drew heavily from in Action Philosophers and Incredible Hercules. He describes something called the "Ultimate Boon" which is a central feature of many hero stories, where the reward for adventuring is immortality, or the return to life, et cetera. I wanted Aram and his brothers' immortality to come from somewhere, not just come innately as it did in Valiant 1.0. So I incorporated elements of Gilgamesh, because then you have the idea of the hero, the original hero, and the ancient city of Ur, and so forth. Then I reread the epic several times -- it's quite moving, even today --- to grab elements for the #0. As Armstrong says, it's not a one-to-one similarity. I hope no one uses this comic to cheat on their Gilgamesh book report, the teacher is gonna be like "What the hell...?" The translation I read was this one, it was great, I really recommend it. 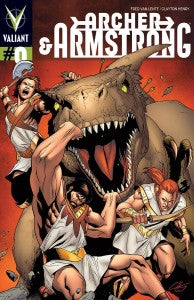 ComicBook.com: That is quite a...being there. Is that a person inside of a mechanical conveyance, or are they all the same being? Van Lente: Clayton did a great job with that the design there, yeah. It's hard to say where the mechanical begins and the organic ends, or vice-versa. Where do these creatures even come from? We may learn the answers as Arc Three continues. ComicBook.com: Is there an element of taking the magical and the mythical and making it scientific here, with the inclulsion of the mechanical spider legs and the mercury and such? I'll admit I have not read Gilgamesh in many years but I don't remember what they could be corollary to. Van Lente: The man-scorpion comes from Gilgamesh, as does the idea that the Garden of the Sun has gemstone foliage or various types and colors. The monster of Humbaba and the Sages and the Great Cataclysm also work in there, though Aram jumbles up the order of things and assigns different causes and effects. ComicBook.com: Gilad is not treated with the kind of reverence he'd later come to expect in this story. Is that meant to be actual events or the result of an unreliable narrator? Van Lente: Gilad, don't forget, is the youngest Anni-Padda brother, and so it's natural for his older siblings to give him a hard time. He is also very young in general period, so in their eyes hasn't done anything he deserves respect for. ComicBook.com: Certainly this lends Aram a little credibility in Archer's eyes that he didn't necessarily have before, in terms of his actual intellect? He does his best to hide it. Van Lente: Probably. Armstrong quotes poetry as well as he writes it, but he is impulsive -- and making drunken decisions have the time. I think Archer is more impressed with Armstrong's heart than his brain ... but he may be given reason to doubt even that in the near future!