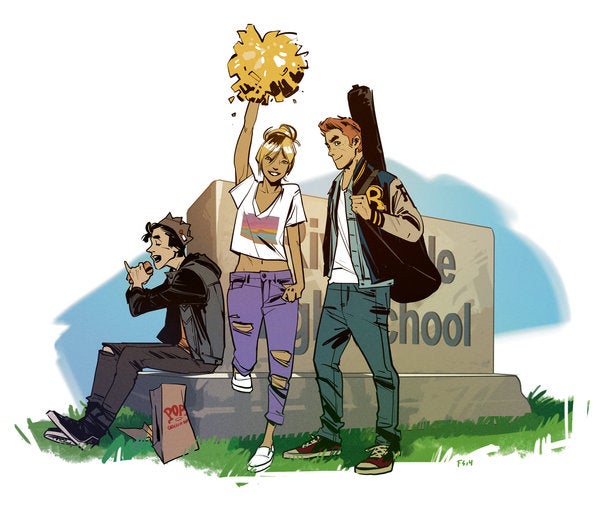 Eisner winners Mark Waid and Fiona Staples will relaunch Archie with a new #1 issue in 2015, The New York Times reports.

The relaunch is tied to Archie's 75th anniversary in 2016 and both the Riverdale TV series and an apparel line from the fashion designer Marc Ecko, the report states. It seems likely that the new Archie will more accurately reflect the tone of Riverdale, which has been described as Archie meets Twin Peaks and will deal with the darker underbelly of a seemingly idyllic town like Riverdale:

"Riverdale is named after the fictional town where most Archie Comics characters reside and which will serve as the setting for the show. Set in the present, the series offers a bold, subversive take on Archie, Betty, Veronica, and their friends, exploring the surreality of small-town life…the darkness and weirdness bubbling beneath Riverdale's wholesome façade.

"The series will showcase the eternal love triangle of Archie Andrews, girl-next-door Betty Cooper, and rich socialite Veronica Lodge, and will include the entire cast of characters from the comic books—including Archie's rival, Reggie Mantle, and slacker best friend, Jughead Jones. Popular gay character Kevin Keller will also play a pivotal role, with other characters from Archie Comics' expansive library also slated to appear, including Josie and the Pussycats."

The film adaptation of Josie and the Pussycats similarly dealt in some heavyhanded satire.

The new Archie #1 is the latest move to reinvigorate and energize the Archie line, which CEO John Goldwater admits seemed out of touch with the audience and the marketplace when he first took over.

"I found Archie to be dusty, irrelevant and watered-down," Goldwater told the Times. "It has taken me a while to really wrap my hands around where we are as a brand."

Everyone quoted talked about relevance as a key to their approach, with Roberto Aguirre-Sacasa saying that becoming irrelevant is the worst-case scenario.

"Over the years, some of the sharp edges have been sanded off," Waid said. "They are kids, and they should act as kids."

Plans for Girls creator Lena Dunham to do an arc in 2015 remain in place, and the image above is described as a "possible" new look for the Riverdale gang, so it's likely the series will launch in late 2015, closer to the presumed premiere date for Riverdale in the fall and the start of 2016 and the 75th anniversary festivities.