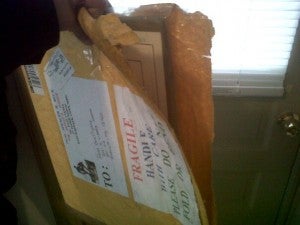 Following Conan O'Brien's look at lousy FedEx drivers, I cast my memory back over the last year or so and realized that there were quite a few instances of precious items in the comics industry that were treated with a little less care than you would hope for by FedEx and UPS. The image at left is not of pencil art going to an inker or inked art going back to the publisher but instead an image of a piece of original comics art--previously published and sold to me by a third-party reseller--which I purchased in March. In spite of the 6" by 11" "FRAGILE, HANDLE WITH CARE" notice splashed across the whole bottom half of the envelope, this is exactly the condition that the page arrived in from UPS. This photograph was taken immediately after I brought the package in off the porch. Below is a series of photos taken between March 2011 and July 2011 by finishing artist Norm Rapmund. The boxes were received at his home in California from pencillers via FedEx. They were obtained by looting his Facebook profile, but I did so with permission. Click on any image in the gallery below for a larger version with a caption describing it. [gallery]

Are Your Comic Books in Good Hands?

Call of Duty: Vanguard Install Size Will Be "Significantly" Smaller Than Previous Games