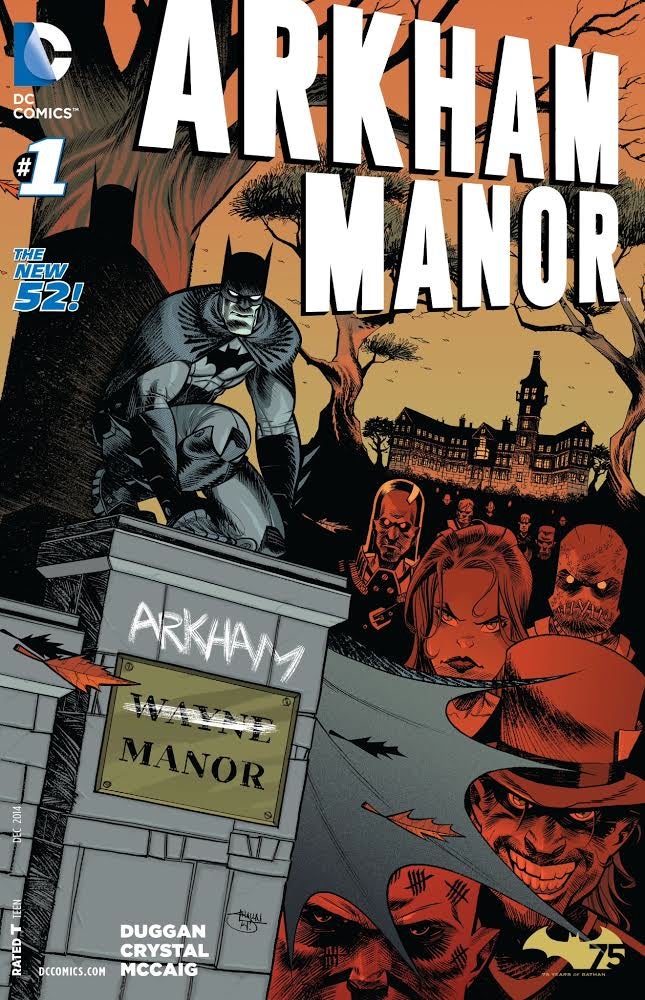 Arkham Manor #1 acts more like a prologue than a first issue. It sets up the series as it spins out of Batman Eternal #30. The premise of Wayne Manor being transformed into a replacement for Arkham Asylum is woven into the narrative in a surprisingly tactful manner. The exposition is neatly presented, so that the necessary housekeeping reads naturally.

Although this issue may only serve to lay the framework for the story to come, that's not a bad thing. Gerry Duggan and Shawn Crystal use these pages to beautifully construct a fascinating premise, one that has me hooked.

The story focuses around Batman, but here is a character that is almost unrecognizable when compared to appearances in Snyder and Capullo's Batman and Brian Buccelatto and Francis Manapul's Detective Comics. Here he is defined by his anger and violence. Batman goes beyond being a fearsome vigilante to being someone who is often selfish, unlikable, and sadistic. There is a sequence in this issue where after successfully stopping a pair of muggers and forcing them to apologize, he continues to brutalize them as their victim runs in terror. 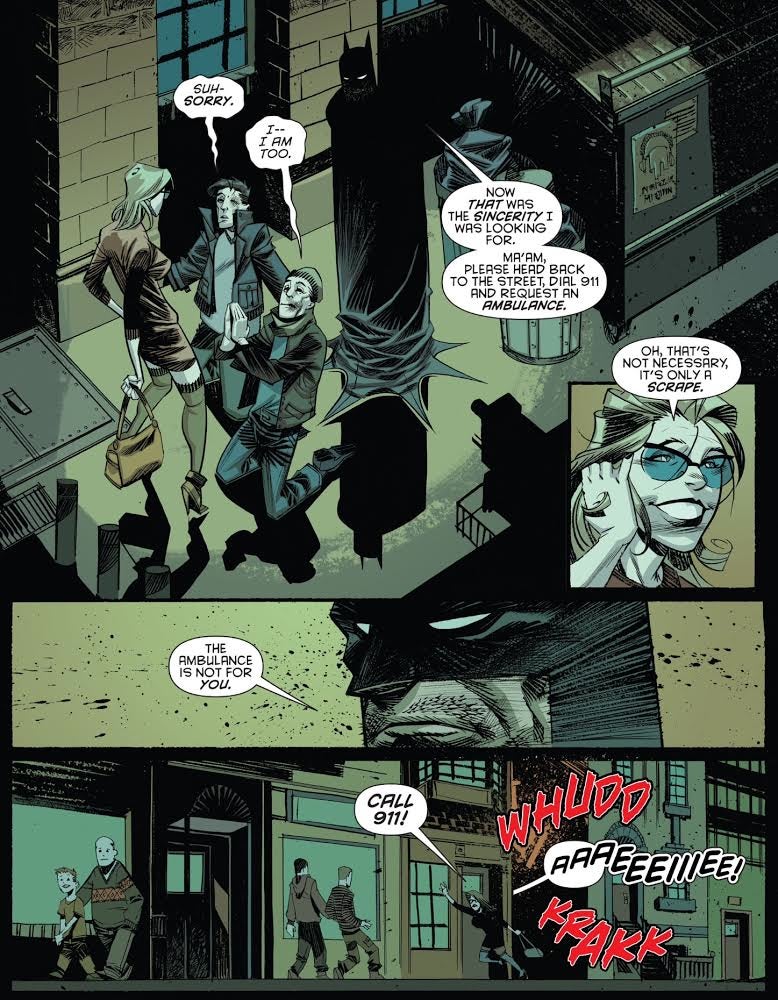 Duggan and Crystal do not present this scene as being cool or the act of a just superhero. It's mean spirited and ugly. Here they are removing some of the allure of Batman in order to get at the interesting conflicts that exist within the character's basic mythos. Batman has always existed as a member of America's wealthiest. His origin is steeped in money, as are his powers. Without the immense Wayne estate, the orphaning of Bruce would not be presented as special and there would be no Batman. Removing that estate and forcing him to view the criminals he terrorizes as peers seeks to explore the nature of Batman's privilege and its troublesome nature.

There is a murder mystery at the heart of this story, but that's not the driving conflict of Arkham Manor #1. Instead, it is choosing to address the issues of class and recidivism that are perpetuated in all Batman stories, but almost never addressed. The potential in that concept alone is good reason to read Arkham Manor.

Crystal's art is an equally good reason to seek out this comic. Arkham Manor #1 marks his debut at DC Comics and it is an impressive start. His work here contains strains of Sean Murphy. Sharp, plentiful line work is used not to create overly detailed images, but ones that strike a powerful atmosphere. His compositions are tense and angular, but never cramped or overly busy. Some of his lines are so taut that it's possible to imagine playing the violin across them. 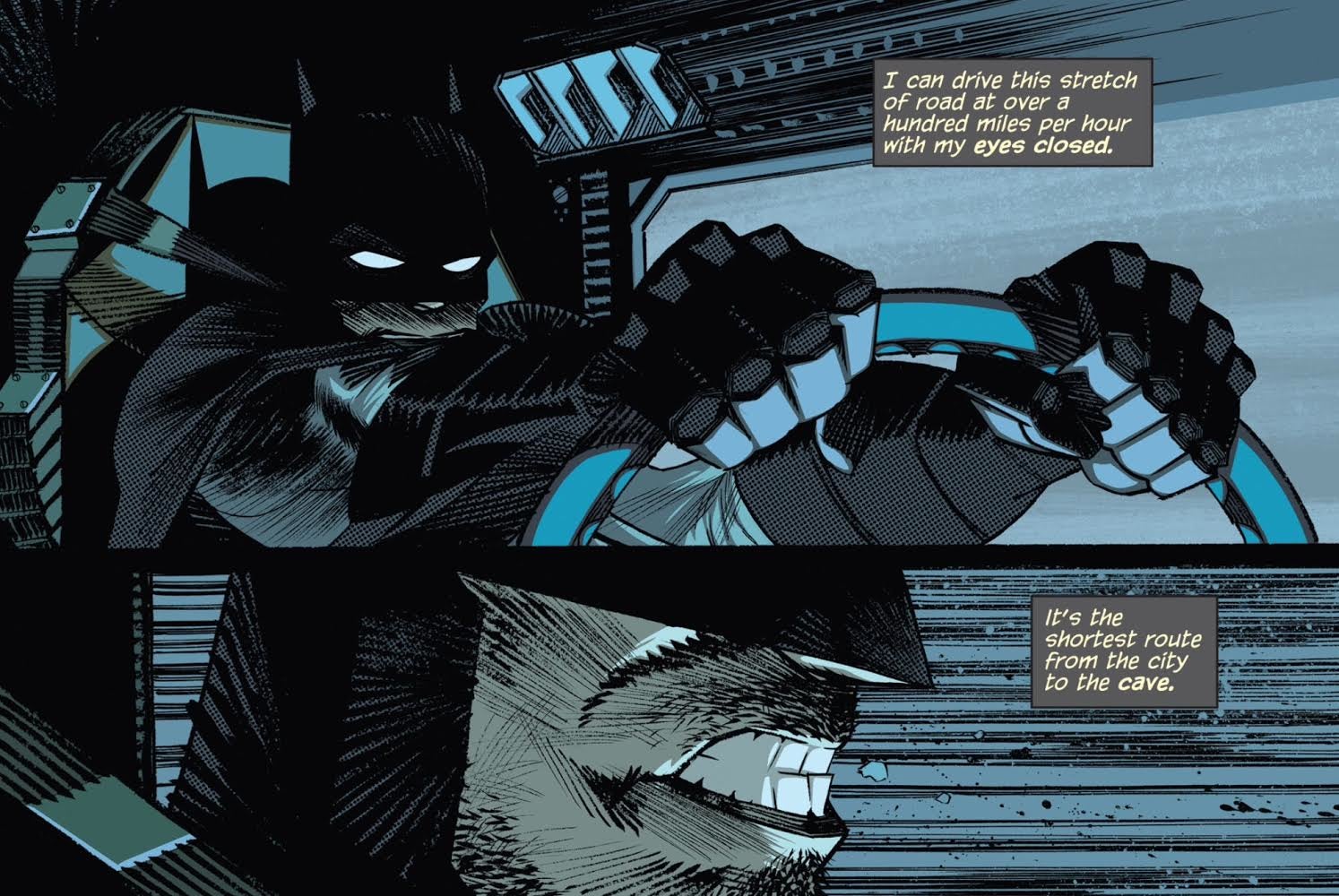 In the panels above it's easy to see how naturally Crystal's style fits (and creates) the tense, moody atmosphere of Arkham Manor. In the top panel, he places Batman at a distance from the reader and steeps him in shadow. It's a technique used throughout the issue to make Batman seem antagonistic and intrinsically different; he is made to be the other. His long outstretched arm creates a stressed, rigid line across the panel. Even when the panel below creates a close up, it focuses on his gritted teeth and jaw line. His face is composed of sharp angles and signals stress and anger. Even when close to Batman, his appearance seeks to drive the reader away.

Arkham Manor #1 is an exciting start to a series that is packed with potential. Duggan and Crystal have created a scenario that gets at the very heart of this 75 year old character, touching upon ideas that are rarely recognized in Batman comics. Just as important, here they show the skills to tell that story in a way that is visually striking and always engaging. This could be the beginning of a beautiful series.