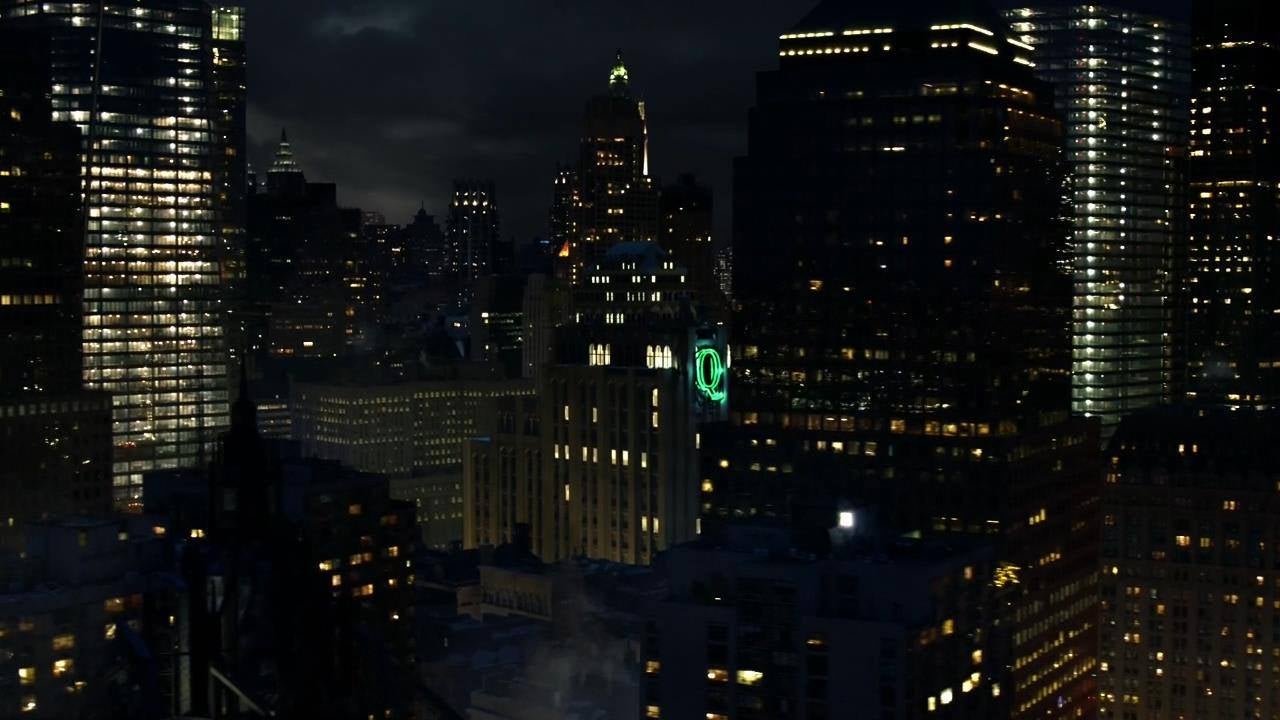 Earlier tonight, a number of our readers noticed that we had omitted a Queen Consolidated logo (seen above courtesy one of our Facebook commenters) from our list of Easter eggs and DC Comics references on tonight's episode of Gotham.

You can click on it to see a larger version.

Meanwhile, we were working on a write-up for The Dollmaker, a minor DC Comics villain who recently made his first New 52 appearance in Detective Comics and who, as luck would have it, may be the first piece of connective tissue between Gotham and the Arrowverse.

The Dollmaker is the name of a number of DC Comics villains, but it's probably safe to assume that the one being referenced in Gotham is Barton Mathis, the most recent incarnation and the one who appeared on Arrow during the show's second season.

In the comics, as well as on Arrow, he uses a fast-acting paralytic to incapacitate victims, and then he makes "dolls" out of their bodies, killing them in the process. In Gotham, two people acting as his agents use a fast-acting knock-out drug to kidnap children for reasons never made explicit onscreen.

In the comics, he wears a mask made partially out of human skin -- his father's, to be exact.

In that story, his father was shot by a young police officer -- James Gordon -- and Barton was sent to live in foster care, emerging years later as The Dollmaker. After an initial arc in Detective Comics -- he was the one who removed The Joker's face for him at the start of the New 52 -- he reappeared briefly as one of the villains teamed up in Forever Evil.

Of course, given that Mathis's father was killed on a "hunting party" in which he was searching for victims, it's possible that Gotham, being a prequel and all, will see a young Barton Mathis and that his father is the Dollmaker referenced here, and we'll see him again later, presumably dying at Gordon's hand.

In any event, recent comments by Gotham showrunner Bruno Heller that he would love to eventually cross over with Arrow, The Flash or Constantine would likely have gotten tongues wagging about either the presence of The Dollmaker in both shows or the presence of what certainly appears to be the Queen Consolidated logo (see right for a version from a recent poster for The Flash if you want to compare and contrast). Having both in one episode? That seems like a lot of coincidence.

DC's Chief Creative Officer, Geoff Johns, has explained that the reason all of the shows and/or the movies aren't explicitly connected, is to give the creative teams the freedom they need to tell the stories they want to tell without worrying about another show's continuity. So...what if a creator wants to tell a story that involves winks and nods to the other shows?

While Marvel Studios have managed to make Agents of S.H.I.E.L.D. dovetail with the cinematic universe, part of that may be that the characters being used are just people who live in the Marvel Universe, not actual headlining superheroes. The villains, as well, are C-listers for the most part, whereas Arrow is using Ra's al Ghul and The Flash is using the Rogues. That isn't to say that Warners couldn't plausibly do the same thing Marvel is doing, but S.H.I.E.L.D. has the benefits mentioned above as well as that of a universe that's been interconnected for years, a well-oiled machine behind the scenes and perhaps most importantly, a parent company who works exclusively in-house these days, with Disney and Marvel Studios overseeing everything very closely.

The DC shows are on a handful of different networks and while Warner Bros. Television is involved with all of them, navigating a crossover between NBC, Fox and The CW could potentially be very difficult to pull off (plus, CBS and TNT coming into play in the next couple of years). The creators of Constantine and Arrow have already said that they weren't going to cross over, and frankly nobody much expected Gotham to do so since it's set years in the past.

Which, of course, is part of the curiosity here. The Queen Consolidated we (apparently) see here is likely being run by Robert Queen, while Oliver is still a kid. Even if this is a stealth crossover, there's little chance we'll see Gordon jumping rooftops, chasing a vigilante with a bow and arrow. Arrow is very definitively set in the modern day, with Felicity's supercomputers and all. Things like cell phones exist in Gotham, but they're certainly not a key part of the crime-solving business yet, pegging its nebulous "recent past" time period as probably somewhere in the mid-to-late '90s or early 2000s.

Fans who went to the screening of The Flash pilot at Comic Con International: San Diego this summer also know that

Bruce Wayne exists in the Arrowverse, and will eventually merge with Queen Consolidated years in the future

. That adds a bit of extra fodder for speculation.

Whether anything will ever come of it or not, at the least what we learned is that these characters exist in both shows. We may never get a straight answer as to whether that means they're coexisting in a shared universe or whether two universes exist with nearly-identical versions of these characters.