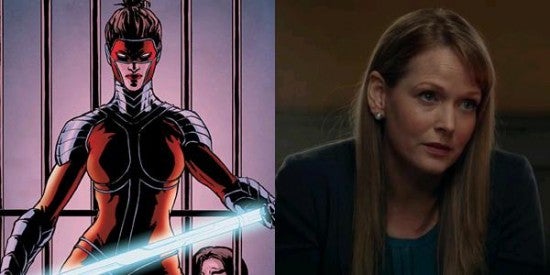 Warning: Spoilers ahead for last night's episode of Arrow, titled "Streets of Fire."

As the action amped up throughout last night's episode of Arrow, it became clear that it was unrealistic for everyone to make it out of Starling City alive. Deathstroke's Mirakuru army were savaging the streets, seemingly at random but -- if you paid attention to the narrative of the episode -- probably at least partially by a design that isn't yet clear. By the end of the episode, the Mayor, the chief of police and the District Attorney were all dead, leaving the city with a dangerous and chaotic status quo that seems likely to extend into the third season, since even if Starling City survives, it will do so having been the victim of its second major terror attack in as many years and suffering the loss of nearly every major part of the city's leadership. 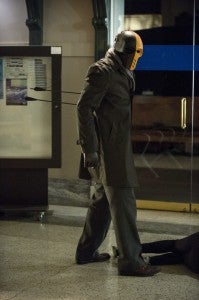 Of course, two of those civic leaders are familiar faces to DC Comics fans. Kate Spencer, the city's DA, is better known to readers as Manhunter (or at least she was prior to the New 52; the Marc Andreyko-created version of the character hasn't shown up since the relaunch three years ago), while the mayor was Brother Blood. Blood, of course, has been a major villain in the series all season long and the odds of his making it out alive -- especially after discovering the Arrow's secret identity in last week's episode -- always seemed fairly remote. Spencer, on the other hand, was seemingly little more than an Easter egg for fans, one of many characters who share names with DC Universe counterparts mostly just to communicate the message that, yes, the writers know their source material. The actress who played her -- Chelah Horsdal -- didn't have the look and was significantly older than the other actors. Executive Producer Marc Guggenheim -- just announced as the incoming writer of Marvel's X-Men -- joined ComicBook.com for a few quick questions about the deaths of Kate Spencer and Sebastian Blood -- and whether this truly closes the door on the idea of Manhunter in the Arrowverse. ComicBook.com: What was the thinking behind choosing Kate Spencer to be one of the deaths in the run-up to the finale? Marc Guggenheim: We wanted a few deaths that would be "impactful." To our way of thinking, that meant killing off familiar, established characters. Kelton in "City of Blood" and Kate Spencer in "Streets of Fire" are -- well, were -- among the few "recurring" faces that we've established. It's always hard to lose a character, even a minor one, but we felt that it would raise the stakes of the assault of Slade's army if it wasn't just nameless "red shirts" among the casualties. ComicBook.com: You guys have been widely praised for making Arrow feel like it's immersed in the DC Universe by using familiar names for minor characters. Do you feel like having to consider fan reaction to everything you do to almost anyone is kind of the flip side of that? 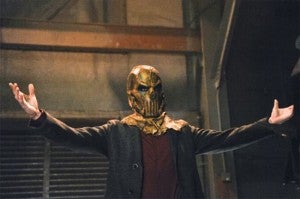 Guggenheim: We definitely pay attention to the feedback we get throughout the course of the season. We like knowing what the fans are liking and not liking; we like knowing whether certain things are resonating. All the feedback is educational. ComicBook.com: Did you guys ever consider trying to introduce Manhunter? A lot of people felt like the casting pointed in another direction from the word go. Guggenheim: Manhunter would definitely be a DC character who would fit well in the world of Arrow. I'm also a big fan. Never say never. ComicBook.com: Was it a harder decision writing out a character like Kate -- who's a DC Universe character but a fairly minor force in the show -- or Blood, who was obviously a major player but also a bad guy and presumably someone whose path you had more or less mapped out? Guggenheim: It was probably easier to kill Blood. From jump, I think we all collectively knew there was only one way his story could end.

Arrow Exclusive: Guggenheim On DC Universe Deaths, Whether We Might See Manhunter